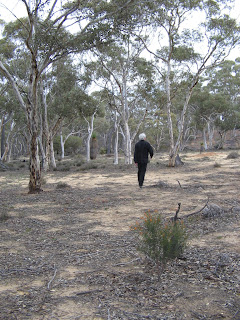 What is the comparative of prolific?

John Kinsella, in this latest extension of his “counter-pastoral” project (The Hierarchy of Sheep, Fremantle Arts Centre Press 1-86368-315-1 85pp) manages a tricky balancing act between the extreme givens of the bush and the fashions of art gallery and English Department. A belligerent posturing is implicit in Kinsella’s term, while there is only so far a poet can be anti-Georgics or extra-Georgics or post-Georgics before the game becomes exhausted or obvious. Nevertheless,  “counter-pastoral” is an extended essay that takes the Pastoral concerns and illusoriness of ancient and 18th century Europe and tests them against our own realities: environmental degradation, both random and systematic destruction of nature by humans, and a seeming indifference on the part of many Australians to do anything about these things. In the midst of this, at least one vital concern ties us to those earlier Augustan times: livability. At or just below the surface of Kinsella’s poetry run questions such as, what is it to live? how do we live well? how can we live with this? is this the best way to live?

A lead to this condition of anxiety within nature is presented in the opening poem, ‘Adaptation’:

The chemical body
shielded by foliage
plays havoc with the seasonal
turnaround, the adaptational
quirks of vampire finches
on a small island
of the Galapagos
archipelago.

Charles Darwin’s inheritance informs the syntactic shifts, permeates the general contents and dominates the meaning. Pastoral is asking for it and Kinsella has merciless fun borrowing its antique gambits for own his purposes. Gambling with gambolling, one might say. Indeed, it could be said, what else would you expect! Kinsella cuts clear beyond irony in his use of pastoral antecedents which are phony or unsatisfactory models. His phrase “the grim idyll of the interior” is an adequate indicator of this poetry’s preoccupations; it also exposes a dilemma at the heart of Kinsella’s work. After all, an idyll that is grim is still an idyll. The most intensely descriptive and relentless passages usually deal with violence in nature and human ingenuity at stuffing things up. This poet’s absorption with grimness can  be read as a late romantic fascination rather than genuine disturbance or horror. Consider the poem title ‘Cut in Half by a Sheet of Corrugated Iron Ripped from a Shed by a Strong Wind’, with its offhand final remark; “...didn’t know what hit him.”


Intended or not, the result is a rich evocation of death within nature, with no escape. The drive of the language, its sense of inevitability, can be seriously at odds with the political moral that is the unwritten centre of the poem. One is reminded of Philip Hodgins’ dire dictum that all poetry is about death. Determined field notes on the actions of nature (“where THE LAND does its urge thing”) use a language that talks over the top of itself, frantic to include the full catastrophe. Nature is the reality that is more prolific. Just as the poems burst forth with recognizable natural achievements, so also they contain the signs of their own transience and decay. Over and over Kinsella displays these changes. Intrinsic to the poems’ success is the acknowledgement of what any “success” in nature inevitably implies; it is quickly observable how often words like ‘falling’ and ‘failing’ show up in the rearguard actions of his poetry.

Before such reality, the cultural world of cities looks uncertain and insubstantial. The future is very uncertain when it’s a grim idyll. Inside dangerous nature we come face to face with humans. Kinsella’s world is populated with wife-beaters, drug-crazed country hoons, corrupt politicians, business sharks, hardened farmers, mindless hedonists, bigots and low life. Sometimes they are portrayed satirically to the point of uncomfortable farce (e.g. ‘Killing the World’), other times with a keen eye to their cruelty, shallowness or, just occasionally, achieved self-awareness. In such company it is a relief to meet Mikhail Bakhtin, Kevin Hart or some other conveyor of civilization, their names prefacing the poems or laced through the lines via the preferred Kinsella strategy of exposing his sources in the art itself. Who Kinsella feels more comfortable amongst remains an open question.

So where do we locate the salve to this callousness of conditions and events? We are led  to the conclusion that heartlessness and random destruction might well be the main themes, means and ends to the situations he depicts. Clues elsewhere in the work to possible solutions, visions or even just escapes from this inevitability, are not so readily identifiable. Nearly every poem has what was referred to earlier as one kind or other of political moral as its unstated centre of gravity. Poetic alliances between the aesthetic and the political can leave the reader with divided allegiances. The superb presentation of, say, collapsed land or some unlikeable hothead, is a valuable asset, while the futility the poems engender before such facts leave one exasperated. A powerful evocation of crisis is nevertheless achieved, the possibility of positive change left hanging. “...Progress a lie, we are / encircled and never/ get free however the day / strains and fails...” (‘Parallels’) The extent of our tolerance and awareness, social questions that reach down into our own  personal well-being - what can be described broadly as livability - are the wellspring that saves Kinsella’s work from indulgence, indifference or some form of ethical despair. This same value of livability gives meaningful purpose to an existence and a world that would otherwise be little more than unavoidable torture.

That said, there is much to enjoy in Kinsella’s varied display. A subversive humour is evident from the outset in the very title of the book, for what creatures are less hierarchical than those woolly-heads that follow one another into the wrong corner of the paddock? It’s the humans who invent the jokes; Dolly the clone is close by in his ovine sequence. We also later learn that it is tame lambs that are lowest in the hierarchy, being the first to get killed. Kinsella shares Hodgins’ laconic bush wit in the two-line poem ‘Rainwater Tank’:


Half full in winter
Half empty in summer
raising the question, why laconicism, that specialty of Australian speech, has not been cultivated more as a form. There’s a lot of it around. Mind you, once cultivated, is it still laconicism?

Kinsella’s clear talent for borrowing voices is most explicit in his loving mimicry of John Forbes’ delivery in poems dedicated to that poet:

The interior fights back
like the inoculated rabbit
in the Flinders Ranges
as you watch an adult movie
just to find that it doesn’t
do the trick, despite a view
from the hotel window
out over the sweeping coast,
and summer fashions
in the bar that might be
pure Sydney.

In fact, Kinsella’s sheer diversity of voices and prosodic skills are a treat. There is no let-up. Here as elsewhere we can enjoy for its own sake a masterful use of the colloquial, as in his short play written entirely in hilariously convincing rhyming couplets:

Well, I’d like to get some shooting in,
I’ve had enough of this fucking wheat bin.

His exuberant interplay of scientific and artworld language, literary reference and jargon keep us ever on the alert, and even more so his sudden compression of a philosophy or a state of being into a few words as, for example, where he ends an unsettling coverage of a Perth sunset with the line: “Darkness intensifies, forcing biographies.”

This review first appeared in the Australian Book Review in 2001