Jan Neruda died in Prague in 1891. He was a Czech national poet who had a street named for him in Mala Strana. The Chilean poet who took Neruda’s name for a pseudonym did so to hide from his father the fact that he wrote poetry.

Is there anything sillier in life
than to be called Pablo Neruda?

The pen name became his public name. Even before he won the Nobel Prize for Literature in 1971, the Chilean had immortalised the unSpanish name of Neruda in a way undreamt of by his great Czech inspiration.

Who assigns names and numbers
to the innumerable innocent?

Nearing his own death soon after that Prize, Pablo Neruda wrote a poem filled with questions. We can hear him gazing at the world. One of his recurring concerns is names. For poets, as for most of us, names are essential meaning, but as he meets mortality Pablo Neruda wonders even about names.

Where the Pablos and Jans? Questions in the poem move with the familiarity of thought. Our names are our own, whether we wrote a word in our lives. Poets too have names that, with death, become associated with their words. They go, leaving colours.

When he wrote his blue book
wasn’t Rubén Darío green?

Pablo Neruda wonders if he will leave behind yellow ribbons. He asks, it seems to himself but also to us, well what is fame, or lack of fame, before the force of time? It is as though the name itself matters not at all, it may as well be invisible.

Is it true they scatter
transparent letters across the sky?

Even the great names of history turn into comic parts before the vast sweep of human time. Pablo Neruda has wry fun with this Hispanic turner of time and tide.

While throughout the poem it is Pablo Neruda’s knowledge of time running out that inspires the questions.

And in the skull do you discover
your ancestry condemned to bone?

Faced with what he knows about the scale of the Earth and Creation, Pablo Neruda gets intimate, as intimate as France and Venezuela. Some of his questions are in the nature of the Chicken-and-the-Egg.

And why did cheese decide
to perform heroic deeds in France?

And when light was forged
did it happen in Venezuela?

Like France, names have their special meanings, obviously, but like Venezuela, they look preposterous almost and small against the processes of time. Even the days of the week are no more than names before mortality.

Why doesn’t Thursday talk itself
into coming after Friday?

Months are a matter of convenience.

And what is the name of the month
that falls between December and January?

Until, as if by some magical transformation, Pablo Neruda toward the end of his poem, asks questions about language itself. The poet recognises that the very means of expression, his passport to immortality, are only words that can do nothing to stop the inevitable.

When they stow too many vowels
don’t sailing ships wreck?

Words are human consolation, they bind us together while nature operates according to its own wordless process. Santiago in 1973 was in crisis.

In which language does rain fall
over tormented cities?

All one can do, at an extreme, or in the depth of meditation, is put words out there, not knowing how they will make contact, or if they will.

Is a dictionary a sepulchre
or a sealed honeycomb?

Pablo Neruda gazes upon existence, watching the patterns, knowing patterns are omnipresent, and that for humans in their mortal awareness, language is the favoured pattern, the quickest means, our way to understand ourselves. Even one’s name is original but borrowed from out of the generations.

So it can understand its itinerary,
which letters does the bee know? 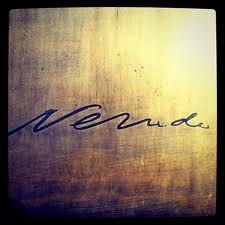