A Trick of Lightness 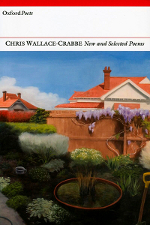 Weighty words and heavy ideas are the very stuff of this poetry, and yet one after-effect of reading Chris Wallace-Crabbe is a sense of lightness. Lightness was a recurring theme of praise for his work at the recent Melbourne symposium held in his honour, as he entered his eightieth year. The Psalmist talks of fourscore years being one of labour and sorrow, but this is not the main impression given by the new poems here. A marvellous delight in wordplay is coupled with a stable ability to describe the multidirectional mind and blessed body, as they walk lightly across the earth.
Lightness does not mean lightweight, for indeed this book is packed with material that obeys the laws of gravity. One eye is trained permanently on tradition. Nor by lightness are we talking about light verse, that underrated charm of English poetry, though Wallace-Crabbe is a dab hand with the occasional and the comic. Lightness can mean keeping all the oranges in the air, it means knowingly mixing the metaphors if that achieves the desired effect. Reading this poetry purely for pleasure we observe in passing the tricks and devices this poet uses to leaven the lump of dough.
So many of his poems open with an object, like show-and-tell. This poem then expands and flourishes around that first fact. Empiricism leads to metaphysics.
‘The moon is full as a goog,’ he declares at the opening of ‘Puck in January’. Australianisms turn into pun and précis and purpose; they set up new meanings beyond their day job. The local lingo lightens the load. Here Puck is saying at once that the moon is full and roundish like an egg and has perhaps had too much to drink. Only later in the poem do we learn ‘the warm stars seem to go walking / all over my body’, with its implication that Puck himself is the tipsy one, tipsy on everything in fact, like the moon. Such is the advanced state of reverie that at the end of the poem we read, ‘My very name/has wandered away.’
Which, some say, is the poetic state of complete identification with the sense of the words; we are temporarily freed of the constraints of the self. Even our true name is on the move. Wallace-Crabbe’s lightness assists toward this state.
Puck is one of the favourite personae of this poet, which itself is an indicator of his sensibility of lightness. When the poet adopts a heavy persona, as when he utters the immortal ‘I’m deadly serious’, we are not sure exactly how seriously to take him. This is in part because his favoured tendency is toward the ludic, the playful, even the mischievous.
Puck is one of his favourite personae, but the poet’s name on the electoral roll reminds us that poets take an insatiable delight in hyphenation. They are forever sticking different and unlikely words together to test effects. A random browse by this reviewer yielded ‘redgums doze’, ‘hydra-headed showerfall’, ‘conceptual furbelow’, ‘multinational magic’, ‘mingy Austria’, ‘elastic familiarity’, ‘scribeless tribes’.
To add to the show-and-tell world spoken of before, there is often a child-like approach to discussion of major adult subjects. The child becomes the adult and the child is inside the adult, as we find in the lightness of argument in a poem like ‘We Live in Time So Little Time’. As he stands ‘on the shifting slabs/of glamorous centuries’ the poet asks the same questions he did when young, but with a grown-up’s seasoned skill at deduction and conversation. We wonder at how a series of questions about creation, evolution, and self could keep a lightness of tone while balancing the ponderous imponderables, and all in strict order.
A related trust in innocent observation backed up with a ton of experience is expressed in the epigraph to ‘The Bits and Pieces’, where Andrei Sinyavsky says nothing uninteresting exists so long as there is an artist ‘to stare at everything with the incomprehension of a nincompoop.’ The objects the poet then describes in twenty-six short poems remind us how the alphabet is all the poet has for basic building materials. To be buoyed up by the possibilities of the letters is a poet’s recurrent joy. This suite of poems is also a sideshow of forms, and the sideshow itself is lightness. Wallace-Crabbe goes to pains to make it look and sound easy, never more so than when shaping a sonnet or trialling a villanelle. Another feature here is his riddling nature, as when he lightly ends the alphabet with ‘Zephyr’:

Yellowish, crumpled, frail,
the leafboats lie
on water black as hair
under a marbling sky;
The secret wind moves through them
unseen but visible.
The aforementioned ‘scribeless tribes’ come in ‘Salt on the Tongue’, another riddling poem. Here the poet lauds ‘the spice of our lives’, listing carefully and briefly different attributes of salt. The final lines demonstrate another trick of lightness in his poetry, one in which meanings hang in the air. Much is said with so little. In this case the last two words are fact, joke, and affirmation, as the conventional two-liner turns into a shared recognition of existence in this our place in the universe:

Between these angular crystals and
Their dark blue sea we live.
Poems are themselves lightness, they are thought and breath and quiet scripting. Hence the irony, sometimes, of poems being bound in gravitational containers like books. There are other ways of talking about the work of Chris Wallace-Crabbe, but lightness will always be in the air. This rock solid object will help along that kind of talk.