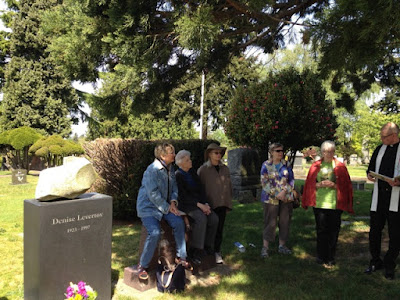 News reached us this weekend of the death of our dear friend Max Richards. He died as a result of head injuries sustained after being hit by a car on Wednesday morning, while walking his dog Pink in the Capitol Hill district of Seattle.

To attend to the shock of this terrible news I have been re-reading many of his recent emails and posts, in order to hear his voice and sit with his steadying patterns of thought. In particular I have spent time thinking about Max’s long interest in religion, of faith lost or found. He gave a paper at the Carmelite Library in the last couple of years on this subject, as expressed in Victorian poetry. The last book recommendation he gave on Facebook was ‘Absence of Mind : the Dispelling of Inwardness from the Modern Myth of the Self’, a set of lectures given at Yale  by Marilynne Robinson, that takes to task the way secularists wish to displace religion with science. Her book is withering in its dismissal of the attitude that we can have an either/or position, and of the poor working knowledge many scientific secularists have of even the basics of the human reality we call religion.

The last time I saw Max was probably when he visited the Library one day with Marilyn, after a doctor’s visit. The last time Carol O’Connor saw Max was at her paper on the poetry of Denise Levertov. He was in Melbourne briefly and attended the discussion at the Library in June. Typical Max, in ensuing weeks he then sent us updates, images, and even a poem on Levertov.  For example, he copied an email of May 2015:

[Spent an hour yesterday - in Elliott Bay Book Company’s shop
(sad they gave up their Pioneer Square wooden treasure house of many rooms,
but now on 10th between Pine and Pike on my regular track) -
with the big big CP of DL from ND.
Eavan Boland intro good (Stanford seems to have a long history of hiring female poetry profs).
The afterword by two scholar/editors makes much of her ‘poetry and poetics of presence’, and is subtle about poetry and politics.
Now there are two biographies I can find out painlessly about episodes I am curious about - Levertov visited North Vietnam! I didn’t know.]
At the graveside gathering on Saturday, one Jan Wallace was the star. See: for her vivacious poem and memories of DL:

Here’s what I sent a friend yesterday:
May 2015 – Capitol Hill, Seattle
The name Denise Levertov brings back to me an evening years ago in Melb, when Judith Rodriguez summoned me to dine with DL who passing through town - I think she’d tried all Melb’s known poets to no avail.
I now regret I took no notes of the restaurant evening, the three of us.
Mainly I remember the eminent lady lacked a front tooth, and have always wondered whether it was a sign of - ? - insouciance, especially when mixing with mere Australians? or an accident that morning.
Now I find online a portrait photograph of DL with gap.
Best wishes for now from Max in Seattle... 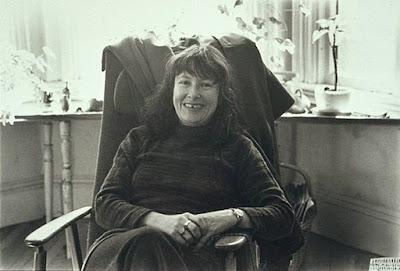 Here is the photograph “with gap”. In another email Max sent a poem he had written to recall the reading at her graveside in Lake View Cemetery, situated in the same Capitol Hill district of Seattle. He also attached a photograph of this event, which heads this essay. Thank you Max. Here is the poem, complete with varying sizes of print.

At the Grave of Denise Levertov

Her faithful friends were there before me -
Seattle - or her one dozen local fans -
ready for Denise Levertov Day,

with bookshop events, her parish church
performing words by her set to music -
Father Glen, in his robes embroidered

P - e - a - c - e , already launched on his
pious spiel as I sidled in, having
toiled uphill in spring sunshine

The immortal remains were sampled
by friendly voices, themselves poets,
with lines relevant to their friend,

their loss, their shared years, lake,
mountain, town, church. The story
of the memorial stone and its

reverent sculptor was told, we smiled
to note that nearby, more visited,
was Bruce Lee’s grave. Martial artist!

The poet of peace, had she still ears,
would have heard words of peace,
of mountain, lake, and sacred space.