An Ode to speechless Bob Dylan 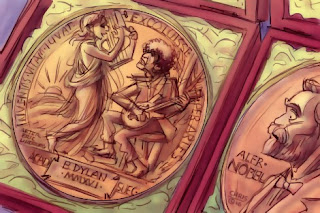 What is the purpose of awarding a philanthropic literature prize to a millionaire rock star? If you wish to draw attention to an unsung national poet, why choose one of the world’s most famous Americans? If it has to be an American, why not one who writes books? Argument about Bob Dylan has peaked for the first time in forty years or so, leaving a lot of people wondering if they’re still “forever young”, and which side of the argument is right.

Dylan’s relationship to literature is well known. He took his name from a Welsh poet. When he sang ‘Desolation Row’ Dylan was locking into the Beat world of Allen Ginsberg and Jack Kerouac. He quotes from a range of writers without fear of accusations of plagiarism. Scripture is close to hand, but also the cornucopia that is the songbook of American popular music. He copies Woody Guthrie and parodies Elvis Presley. His debt to the blues and gospel is apparent, but also to Cole Porter.

The compliment is returned. The literary world has relished and lauded the work of Bob Dylan from the start, admiring his lyrical fertility and vocal ingenuity. On a good day, his gift for register and timing is still astounding. The poet laureate Sir Andrew Motion nominated ‘Visions of Johanna’ his favourite Dylan song, but then everyone has a favourite Dylan song. The poetry is, in that sense, common property, hence the popularity of the Nobel Prize decision in many quarters.

The Dylan bibliography is short. I read ‘Tarantula’ when I was a teenager and could see even then it was less a product of substance than of substances. A whole literature thrives on his impact upon popular music, with thorough analysis of the songs for religious, social and biographical meanings, a critical reception rivalled only by those other game changers of the Sixties, the Fab Four.

Arguments in recent weeks, that Dylan isn’t a writer, are contradicted by the evidence. He’s been writing since primary school in Minnesota. Yet dissatisfaction persists. Is he a writer in the way Patrick White or Boris Pasternak are writers? Is Literature about the personal relationship between writer and reader?

Books of lyrics are for the fans. Reading ‘Like a Rolling Stone’ in a cheap paperback is never the same as hearing that imperious, incomparable song in the original. We even follow the words to relive Dylan’s threatening intonation and deadpan dispatch. How many of his lyrics do we read for possible shades of meaning, as we would with a good poem? We leave Dylan to offer the shades, each time he does a new version. He is famous, even infamous, for attempting new interpretations of his songs through arrangement and emphasis. But is that Literature?

Most likely you go your way and I’ll go mine. The Nobel Committee has proven more flexible with its definition of ‘writer’ than its critics. Indeed, a comical aspect of this year’s Prize debate is the view it’s a slap in the face for the literary establishment, when it’s hard to find a more distinctive landmark of that establishment than the Nobel Committee.

Initial silence from Bob Dylan after the announcement led one of the Scandinavian officials to issue a complaint that Dylan was being “impolite and arrogant.” This declaration prompted even more vitriolic opinion online on all sides, from fans, litterateurs, Dylanologists, and other armchair grenadiers. Just as things were getting completely tangled up in blue Dylan himself broke the silence to explain that news of the award had left him speechless. So maybe he wasn’t that arrogant after all.

Speechless is probably the one thing a Nobel recipient must not be. About the only requirements of a recipient are that they show up, make a speech, and bank the cheque. Whether Dylan will follow the pattern of his predecessors by acknowledging his debt to American writers and talking about the value of his art, remains to be seen.

Speechless though is a normal state for a poet. We shouldn’t be surprised. The poetic act comes out of a state of speechlessness, out of asking how to say things that seem unsayable. Poetry has always been the verbalisation of things that we thought could not be put into words. Whatever we say about getting the gong, few people argue that Bob Dylan has succeeded over again in singing of things that leave us speechless.

This is when it gets down to personal favourites for any of us. Here are two of mine.

‘Just like Tom Thumb’s Blues’ opens “When you’re lost in the rain in Juarez and it’s Easter time, too / And your gravity fails and negativity don’t pull you through”, then tells a story of dangerous women, serious drinking, and general despair before deciding that ‘the joke was on me, there was nobody even there to bluff. / I’m going back to New York City, I do believe I’ve had enough.” This song could be earnest, dire, self-mocking, comical, or a spoof depending entirely on how it’s sung. It reminds me of Horace Walpole: “The world is a comedy to those that think; a tragedy to those that feel.” The poetry of the song relies as much on what is not said, what is withheld, that listeners will provide themselves.

Or there is the speechlessness of love, as in ‘Buckets of Rain’. Dylan speaks in childish wonder of  “buckets of moonbeams in my hand”, that he’s both “been meek and hard like an oak”, lyrical abbreviations of the changing extremes of a relationship. Then, just when he confesses “I like the cool way you look at me”, follows with “Everything about you is bringing me misery”. It’s the surprise disclosure of ‘misery’ that we suddenly see is the centre of the song’s meaning, even as he continues in light-hearted mode. It’s this kind of twist, this still point in the drama, that makes Dylan not just a good songwriter but a great one.