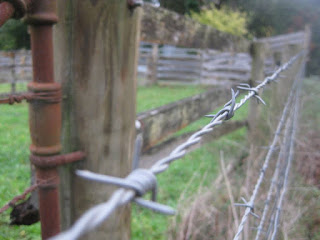 you put up the new fence
but don't take down the old
instead of recycling for parts
there is merely a slow degradation
of the old material
tumour
benign or malignant?
diagnosis unknown

P: There are times when it's clear who 'you' is in your poems, other times when 'you' defies easy identification. This poem is in the latter category, if it's a category.

P: Well, that clears that up then.

T: I just fell into a black hole of pros and cons of the use of first person narrative in poetry... which hasn't cleared up anything but suffice it to say the most humbling moments of sharing my poetry would be when I manage to write something that others say it resonates with them and names something they didn't have words for... so while the "you" is me hopefully if I'm doing it right it can also be anyone!

P: The 'you' is the vital pronoun. I have had the same experience often when inside the poem, or wherever the place is where we talk and think in this fashion. Sometimes I'm fairly certain the 'you' in your poems is God, mainly when you give Him a big Y, You.

:) Other times it seems it could be God, or yourself at some meeting place in yourself. Then other times it sounds like you're taking it out on someone else, like 'why have you made this fence?'

T: God always gets a big You

:) if God is in me and I am in God that is right that it should become hard to distinguish... I think that's what theopoetics is, eavesdropping on that internal conversation between oneself and God and learning/discovering one’s self and place in and through that. I'm not going to get into the personal particulars on what's behind this piece but what I'm trying to capture is the ways we carry "baggage" from our life experiences and relationships forward in conscious and unconscious ways that can prevent us from being seen/known or to truly see and know others (since I think everyone does this to different degrees). It seems to me that doing the work to dismantle the first fence is often not encouraged or supported, people prefer to pretend the old frameworks aren't there and want the strong front. I think we harm each other and ourselves in trying to meet this expectation.

P: I will expand on my response at some later date. Though, why?

T: My poems are can have a bit going on behind them #deceptivelysimple