Berryman and Auden on Shakespeare 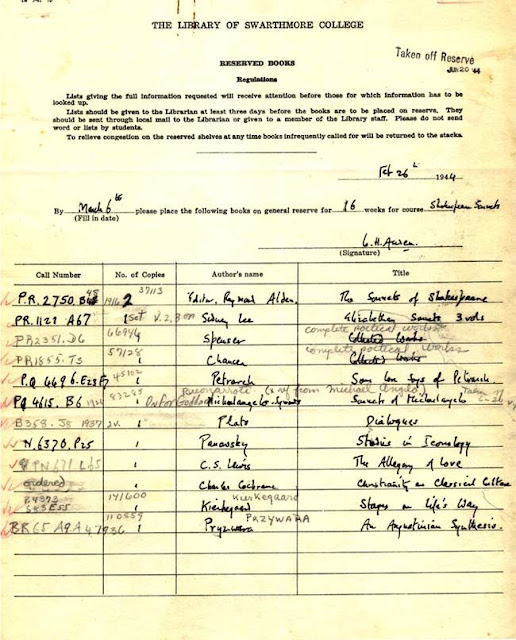 How many ways can we read William Shakespeare? Reading together on holidays the lectures of John Berryman and W.H. Auden on Shakespeare resurrects the world of seventy years ago, its irresistible confidence, its newfound hope. Both poets are finding their feet within a transatlantic milieu in which the whole terrestrial globe is now mapped.

Auden believed that an English-language poet’s views on Shakespeare were essential to our understanding of themselves as poets, a sign of the nature of their vocation. Berryman agrees implicitly with this view and it drives the force of their interpretation, and their own poetic character.

Although we know much already from their writings about their takes on Shakespeare, both books of lectures are posthumous, published over a quarter of a century after their deaths in the early seventies. So we encounter several pasts at once, that of their own lives now ended, that of the world of Shakespeare criticism mid-century, and that further past which is Shakespeare’s, and which all of us make our calls through independent historical imagination.

Do we rewrite Shakespeare in our own image? Berryman’s Shakespeare dies a Catholic, something he asserts with a conviction we would never expect from Auden. Auden avoids conjectures, and may anyway have had the Anglican view that his subject moved with the Reformation acceptance.

Berryman’s Shakespeare is beset by midlife crises that are not fully determined, that exact a before-and-after pattern to the work. Whereas Auden, while sensitive to Shakespeare’s personal life, adopts a regular indifference to it as of central importance to the work.

Berryman’s Shakespeare is not really a European man of ideas, where Auden’s Shakespeare expresses the ideas of Renaissance Europe slant, copiously, and lightly.

Both poets operate knowingly within the world of academic Shakespeare criticism, displaying their own necessary relationship to that world through reference and quotation. Both poets have immense aptitude to academic pursuit but an inventive, and therefore potentially problematic, relationship to Academe. Indeed, both poets ran into difficulties with the standard-makers of their respective universities and did not succeed topmost in their grades, a sting that doubtless drives much of their later Shakespearean talk. We note here the Peter Porter view, that it’s the poets who under-perform at university who then spend their lives proving themselves, and their interpretations, better than the academic status quo. Something true of all four poets referenced in this paragraph.

Both poets talk Shakespeare into the middle of next week, they are both originals of voice and manner. Berryman though must play the academic game more doggedly. His lectures are drama lessons all of their own, constructed at their best to enjoin his audience in the thrill of working beside unbridled genius. Auden’s tactic is to entertain with thoughts and theories, his celebrated feast of ideas. It must have been a challenge keeping up with all the courses; sometimes indigestion, more times pure pleasure.

Berryman offers ideas with a tone of conclusiveness. Auden too, though he runs the ideas past us, not waiting to test their verity in every case.

The panoply of Shakespeare critics are quoted, Berryman showing a greater need to acknowledge his debts, say Dover Wilson. Auden quotes say Eliot at length simply to save time.

Berryman, of the two, commits to serious textual work on a particular play, ‘King Lear’. Auden writes a long poetry sequence, ‘The Sea and the Mirror’, inspired by ‘The Tempest’. Berryman’s poetry is rife with Shakespearean drop-dead grammar. Neither is far from Shakespeare’s hold.

Berryman will do the very American thing from time to time of reminding us that we are dealing with the greatest ever, a habit that causes occasional flurries of Bardolatry. Auden commences with the assumption we are dealing with the greatest poet and doesn’t come back to that point. His anthology of English poetry, which at university was for us simply ‘Auden & Pearson’, includes the complete text of ‘Antony and Cleopatra’ which, if we choose to treat that work as a single poem, has more claim to being the greatest poem in English than the brief sonnets and passages cited by Berryman. But then, can anyone say which is the greatest, and is it important?

We have more accumulated information about Berryman and Auden than we will ever have biography of Shakespeare. The modern poets live on the other side of the biographical mania that took place in the 18th century and now infiltrates our daily lives with its obsessions over events and facts and gossip and psychology. Reading them on Shakespeare, we are caught out again by absence of biography about someone who could write a play in a fortnight to meet last even's commission (say 'The Taming of the Shrew'), that still takes them by surprise and which they strive to enthuse their students.