Some Thoughts on an Inscription INVICTIS PAX 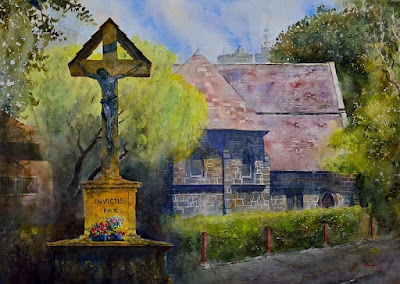 In the Victorian period every youth with a classical education knew that Invictus was a title given to Roman gods. Central amongst these was Invictus Sol, the unconquerable sun. The cult of sun worship was a contender for attention in the early Christian era of the Empire, imported to Rome from the East and a threat to the local deities.

Moreover, Invictus was by extension a motto of the Roman legions, making it a military word of exalted expectations. There is the very faintest echo of this in the naming of the 1948 Australian cricket team, the Invincibles, led by the formidable Donald Bradman. The English were hit for six and no one got hurt. The triumphalism inherent in this word is displaced and problematized by another piece of Victoriana.
Out of the night that covers me,
Black as the pit from pole to pole,
I thank whatever gods may be
For my unconquerable soul.

In the fell clutch of circumstance
I have not winced nor cried aloud.
Under the bludgeonings of chance
My head is bloody, but unbowed.

Beyond this place of wrath and tears
Looms but the Horror of the shade,
And yet the menace of the years
Finds and shall find me unafraid.

It matters not how strait the gate,
How charged with punishments the scroll,
I am the master of my fate:
I am the captain of my soul.

Although W.E. Henley’s famous poem was composed in 1875, it was given numerous titles by different editors, as Henley left the words to stand alone. ‘Invictus’ became the settled title when the estimable Sir Arthur Quiller-Couch named it thus in his edition of The Oxford Book of English Verse, in 1900. The generation who were sent to war in 1914 grew up with this poem in schoolroom, club, and home. The appeal to personal courage and endurance in hellish circumstances of existential dread would have spoken directly to the experience of those on the Western Front. Survival came at an enormous individual and collective cost. The apotheosis in the final verse quotes Matthew’s Gospel; it’s assertion of self-determination would have brought solace, but some would say it is not exactly Christian in its egoistic self-belief. Somewhat Pelagian, perhaps. As we learn in the film ‘Invictus’, it was a favourite poem of Nelson Mandela, and today we have the Invictus Games.

Peter Bryce writes, “A person participating in the Invictus Games would take ‘invictus’ as his personal motto, asserting, despite  whatever disabilities he may have, that he is not beaten. The word ‘invictus’, used in this way, is the masculine, singular form of the adjective. A woman, participating in such games, would describe herself as ‘invicta’.”

A google of ‘Invictis Pax’ returns memorials to the Great War 1914-1918 in Australia and England. The phrase seems to be in circulation immediately after the outbreak of peace in Europe. It is popular at the time across the Empire as an appropriate expression to commemorate the end of the War and the sacrifices that were made. The emphasis on peace rather than victory is marked. But is there a written source for the inscription? Colin Holden, in his history of the parish of St Peter’s, offers no source in his description of the wayside cross and its dedication. Ken Inglis, likewise, in his extensive coverage of war memorials in the Australian landscape, gives no explanation for the inscription or its meaning.

According to the English memorial site ‘London Remembers’, the phrase ‘Invictis Pax’ that is cut on the Wimbledon War Memorial comes from the ancient Greek writer Hermes Trismegistus. Research to locate the quote in these hermetic writings has thus far been to no avail. The site records that the same words are found on the Chelsea War Monumentl, without ascription. This site adds that the phrase “probably means ‘Peace to those who cannot be conquered’” and it is that ‘probably’ which indicates an uncertainty some have about its precise meaning.

Peter is more thorough in his reading: “Some suggest that the words should be translated into English as something like ‘Unconquered Peace’. This is actually quite impossible because the noun pax is feminine and any adjective describing it would, in Latin, have to be feminine also. Thus, the rendering would have to be ‘Invicta Pax’ -   the ‘-us’ ending is masculine.

“The generally accepted English meaning of the Latin words ‘Invictis Pax’ is something like ‘Peace to the Unconquered’ or ‘Peace to the Undefeated’. The idea apparently being that the war is over, the fighting has stopped - let us (the undefeated) get on with our lives without the awful spectre of war hanging over us.

“The form ‘Invictis’ is in the dative case. Latin nouns can appear in any of six cases. The dative usually is rendered in English as "to" or "for" and indicates the person interested in an action. Thus the sentence ‘Hunc librum tibi dabo’ means ‘I shall give this book to you’. ‘Tibi’ is the dative case of the pronoun ‘you’ and clearly indicates the person interested in the action which I am about to perform.

“Thus, I believe that the original inscription on our wayside crucifix - INVICTIS PAX - is correct. ‘Peace to the Undefeated’.”

When the wayside cross on the corner of Gisborne and Albert Streets was unveiled in 1924 the world lived in a state of unresolved trauma and widespread denial about what had happened in the previous decade. The British, in particular, and Australians lived with a dilemma of identity: they won the peace but at a terrible price. The inscription tries to keep these vying forces of identity in balance. All of the English war memorials that I have found with the inscription are stone monuments, not crucifixes. The presence of the words ‘Invictis Pax’ below a crucifix would necessarily raise theological reflections in the minds of some observers. Whether this was the overt intention of Canon Hughes and those who installed the wayside cross remains an open question.

Peter raises a further minor matter. “You will notice that there is a discrepancy between what is carved into the stonework and what appears on the much later metal plaque. The carved inscription is ‘Invictis Pax’, whereas what appears on the plaque is ‘Invictus Pax’. My firm belief is that the carved inscription (which would date from the 1920s) is correct, and that the version on the plaque is just plain wrong.”