The Gang of One : Selected Poems, by Robert Harris


The Gang of One : Selected Poems, by Robert Harris (Grand Parade Poets, 2019) 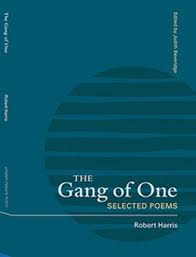 Reviewed by Philip Harvey and published in The Melbourne Anglican, November 2019

Those of us who attended the memorial for Robert Harris at Holy Trinity, Balaclava in 1993 recalled the life of a hard-working man, both in terms of manual jobs and his first vocation as poet. He was only in his early forties: “Go home and suffer employment, write. / There are so many greys you cannot fight.”

Anglicanism in its many forms is an unintended running theme of this book, as we follow chronologically Harris’s evolution as a questioner after experience, through charismatic encounters, to gradual conversion steeped in Scripture and sacrament. He called his discovery of church a homecoming. Many readers of these pages will recognize well the places he’s gone.

He takes to task the lazy and dismissive attitudes to religion he finds pervading our society. Harris engages in extended argument with Australia’s easy platitudes and consumer denials. “Show me your churches with names like soccer clubs,” he writes, “and I’ll show you our wisdom book, The Video Clips.” These are not rants but carefully articulated diagnoses of where we succeed, and where we fail. His gaze is equally on the heritage of this land (“Nobody talks / if Australia makes a treaty / over territory taken by force”) and the neglect of the core European inheritance. In ‘Isaiah by Kerosene Light’ we meet someone after a long search: “I believe this wick and this open book / In the light’s oval, and I disbelieve / Everything this generation has told me.”

In an age when so much writing is captive to current agendas, it is refreshing to read a poet of historical imagination. Harris’s prolonged fascination with the fate of Lady Jane Grey is well represented here. Nominal Queen of England for nine days of 1553, Jane is the educated and vulnerable victim of other people’s power play. Her voice is heard, but at the same time those of Protestants and Catholics vying for control of an evenly divided realm.

Another sequence is ‘Seven Songs for Sydney’, i.e. HMAS Sydney, sunk in the Indian Ocean in 1941. Again, a serious public event mixed with high purpose, emotion, and intrigue is the poet’s sweep. The poems are both elegiac and forensic. In ‘Everything Sang’ he has the ship sing as it goes down (“The steel bound in giggling atoms sang”) before concluding, “I sing with the awe of the drowning.”

Harris’s concern is both the big picture and the small detail. This, combined with a talent for shifting tone and inflection, protean form and image, makes for many satisfying results. He can be by turns combative and tender, enthusiastic and reflective. The book’s blurb calls him a one-off, but for me Harris is presence, reminder, and witness to the Christian life, an outstanding example of its historic and ongoing poetics.

His spirituality was still forming, yet on the evidence here we can conjecture that it would have grown more deeply outspoken, communal, and Eucharistic. Then too, while he can be sly, caustic, amused, engaged with humanity, his love of the natural world and its abiding beauties is another treat, whether you are novice or old acquaintance. He asks questions we would call eco-spiritual, as for example in ‘Goolaga’, a place where existing worlds meet for this time-conscious poet:

The mountain, the law’s source, hangs overhead;
Four hours downhill from the Teaching Rock
Big goannas cling at dusk to golden wattle
And everything quietly closes in.