So now we know, the poet had prostate cancer when he died.

Will death consist of non-being
or of dangerous substances?

They chose to dig up his remains in April of this year.

What is it that upsets the volcanoes
that spit fire, cold and rage?

So many with a claim on Pablo Neruda still, so many wanting the truth.

But do you know from where death
comes, from above or from below?

Now we know for sure that while writing all of these Spanish words he was suffering from cancer, these words that are the lines of his final long poem.

Why did we spend so much time
growing up only to separate?

Everyone has their own Pablo Neruda, politicians and historians and readers and rivals and friends and family and strangers.

Now that the bones are gone
who lives in the final dust?

Each with their own questions needing firm and conclusive answers. While Pablo Neruda, as he sat through what were to be his final months alive, made up a poem consisting only of questions.

Who works harder on earth,
a human or the grain’s sun?

Questions that hint at the answer and how the answer cannot be firm or conclusive. How the answer is, like the question, a lead to further questions.

Is it true that autumn seems to wait
for something to happen?

And when Pablo Neruda asks questions like this we sense that something is impending, something we will have to accept, even though we don’t know what it is. It could be upheaval or loss or change of some kind.

What does autumn go on paying for
with so much yellow money?

The Chilean Government this year ordered the exhumation of the remains of Pablo Neruda and the autopsy confirms that the poet had prostate cancer at the time of his death, with extended metastasis.

Yesterday, yesterday I asked my eyes
when will we see each other again?

The rumours of forty years ago are fresh on the internet. At the time of the coup in 1973 Pablo Neruda planned to escape to Mexico. He had lived in exile before.

And why did I decide to migrate
if my bones live in Chile?

While Pablo Neruda pursued poetry his whole life, he was also committed to a cause. Pablo Neruda was human: one day he was going to die. It could be next week.

Is this continual breaking
the order or the battle?

Whether or not he knew he was going to die twelve days after the coup, he stayed by the ocean where his house was located and made up a poem made entirely of questions. Question sentences were the single grammatical construction, the form, he chose to write his long poem of seventy-four cantos.

For the diseased, what colour
do you think April is?

Alone with all his thoughts, closer still for Pablo Neruda is the knowledge of mortality.

[Have you noticed] how winter collects
so many layers of blue?

There was so little time and maybe the poem was not even completed. Events press in as he tries to handle daily tasks, like his health and the emerging political situation and his next poem.

Will your destruction merge
with another voice and other light? 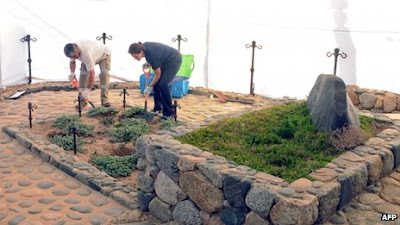 Members of Chile's Medical Legal Service in April 2013 digging up the grave of Chilean poet Pablo Neruda in Isla Negra.