My Brother’s Book, by Maurice Sendak 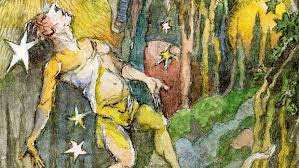 Since ‘My Brother’s Book’ came out posthumously this year, I have been reading it nearly every night. The book only takes five minutes to read. Over five, ten, fifteen minutes I find something new each time in ‘My Brother’s Book’. Because, reading is only one of the things we do with any book by Maurice Sendak. Really the main thing we do is look. We look at each page in turn, each change of line or colour or sequencing or display, in a way that cannot be done were ‘My Brother’s Book’ an e-book. Because reading a book by Maurice Sendak is a book experience. No one reads his books for the information. We don’t read his books in order to get to the end in order to read something else next. We read his books for every detail of word and picture, ready to refer back or forward to other pages. We don’t want to miss anything. We go down or, as happens in somewhat equal measure, up wherever the author goes.

It is still not completely clear what this story is all about. It doesn’t matter. We will never know what it’s all about. The narrative is fairly straightforward though. Two brothers, Jack and Guy, are separated by a cosmic cataclysmic event that strikes where they live on earth. Jack ends up frozen on “continents of ice”, so Guy (whose fortunes the reader then follows closely) experiences several encounters all of which have as their main concern the need to be reunited with his lost brother. This includes being eaten by a bear, descending into some kind of hell, until eventually   he arrives somewhere paradisal, but only really paradisal because Jack is there.

Readers of Sendak know the themes: separation from those we love; a trip or journey for which the overriding objective is reunion or resolution or a state of personal peace; elements of the unexpected, even bizarre. Each picture in the book has a consistency and continuity unique to that particular book. We see William Blake in the figuration, but also Symbolist French etching and Renaissance cartography. We hear William Shakespeare’s ‘A Winter’s Tale’, bur are not too far from the endearing wackiness of Edward Lear say when we are told of Jack, “His poor nose froze.” The story is about love and loss, about death as decisive but not final. The book is a eulogy for a lover lost through death, but also (as we know from its publication date) a farewell to life from the author himself. Too, we have met characters called Jack and Guy before today.

Like all Sendak books the seeming strangeness of the story grows familiar with re-reading until we come to own it as our own. We know it is never just our own, but this does not lessen the sense of ownership. My personal reading of the book is affected by the Blakean image opposite page 12. 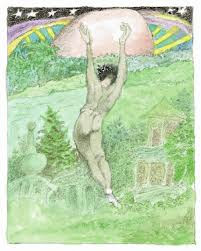 On his journey through time and space Guy “wheeled round in the steep air” before he dropped “down and down on soft Bohemia.” Last year’s visit to Prague causes an instant connection for me with this moment in the book. Of all the places to choose, Sendak has Guy descend from above upon Bohemia, which he wants to identify, it seems, as a paradisal and personal place on Earth. His choice of the word ‘soft’ is perfect. What better word could anyone find to describe the greenery and undulation of that beautiful place? We are being assured through poetry that Guy made a soft landing and that Bohemia is somewhere that can console him temporarily, ease him on his way. The hint is there that Bohemia is a strong memory for Sendak, its connotations personal, but shared with his readers now that loss of his friend is real.

Maurice Sendak made many different kinds of books. ‘My Brother’s Book’ has its own special place in that extensive catalogue. It is for this reason that the one jarring note in this production comes on the publisher’s dust-jacket. Tony Kushner gets rather carried away with the moment. “It’s Maurice’s elegy … for the world of astonishing beauty he created in his books. In these pages, Maurice seems to have gathered up that world, all of it, every corner, in a gorgeous, mad, heart-stopping condensation of every theme, every rhythm, every poetic and visual trope associated with the name Sendak, and then released it.” Why do people say such things? This is manifestly not what is going on in ‘My Brother’s Book’. Nor would we want it to be. True, the book is an elegy. We see some of the artist’s interests and repetitive fixations, e.g. a boy falling through space, but it is a disservice to Sendak’s work to say that all of his world has been “gathered up” in this one book, or that it is a “mad, heart-stopping condensation of every theme”. What kind of a book would that be, even given Sendak’s increasingly self-referential style toward the end of his life? Sendak’s work is much too complex, various, and protracted over periods to be thus contracted to one “condensation”. Demonstrably, Sendak pays homage to some of the great surprises of his life’s work, but not all of them, nor I think are we meant to see this homage as a simplistic reduction of past glories. Kushner’s wish to see in ‘My Brother’s Book’ a definitive encapsulation of Maurice Sendak’s work not only sells short that work, it sells short the book called ‘My Brother’s Book’.

Preferable is to spend minutes, minutes stretching into hours over a lifetime, reading and enjoying each image in Sendak, living and interpreting living through the eyes of the artist, knowing the while that we will never have a complete explanation for the marvels before our eyes. Nor, I hazard, would Maurice Sendak have expected to achieve such a condensation, such a complete explanation for his readers. Because, that’s the way it is, it is in the telling, and the re-telling. 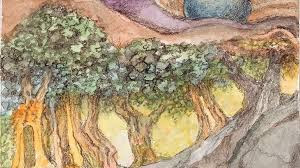