The Blooms at Eccles Street and Howth Head.
Two stills from Joseph Strick’s film Ulysses, made in 1967

The general conclusion of both theatre and seminar this year was that a film of Ulysses is unrealisable. But that doesn’t mean we cannot realise theatre pieces about the novel and film. The ruse was that James Joyce and Charlie Chaplin planned to make a movie together, but ambitions, or egos, or artistic integrity, or time, or other projects, or love interests even, got in the way. Out of this unexpected, but not entirely unlikely, meeting of creative minds came a Bloomsday theatre piece of considerable insight.

The new timber of the Docklands’ Library sent the aromatic fragrance of a recent work site.

This is the most fully realised portrait of the artist as a middle-aged man that the script committee has yet created. The reason is obvious: the Joyce character has a natural opposite, a larger-than-life contrasting counterpart up against whom he has to test his ideas, his personality, and his achievement. They don’t get much bigger than Charlie Chaplin. We are allowed to see Joyce at home with Nora, or on outings, in his natural environment. This humanises him, makes the remote artist more accessible to an audience, and believable. Chaplin too is an irrepressible fountain of ideas, but his art is vaudeville impressions, slapstick routines. This will never sit easily with the subtlety and expansiveness of Joyce’s art and conflicts inevitably ensue. For every great Ulysses film scene concept they come up, there is another where Joyce’s eye for aesthetic excellence or Chaplin’s nose for popular entertainment get in the way and lead to clashes. Chaplin’s consecutively attractive French secretaries do not help either. They interfere with their own opinions, the most ludicrous being she who would have Stephen Dedalus expunged from the film on the grounds of her personal distaste for his unwashed character. Joyce and Chaplin’s mutual admiration society continues undiminished, even as they discover their faults and foibles, all of which they laugh off, as people who understand human nature will do. Ultimately it is never going to work. The Tramp may morph into other personalities, but not the new womanly man, Leopold Bloom. Chaplin and Joyce part amicably, to pursue their Muse elsewhere: Charlie goes back to California to make The Gold Rush, Jim stays in Paris with Work in Progress. This is Bloomsday’s Much Ado About Nothing and Chaplin rounds off the comic good-humour by singing “Easy come, easy go.”

Through the library windows the lights of the Bolte Bridge gleamed in the cold tranquil night.

Other characters in this twenties fantasy enhance our understanding of the Irish novelist. For me, the part of the Parisian avant-garde composer Erik Satie is especially helpful. Satie was an eccentric recluse. He punctuates the play with solo appearances, wearing a green satin dressing gown and nightcap, broadcasting gnomic sentences through a stupendously large red megaphone. Satie prefigures the theatre of the absurd that would inspire Paris after the next War. Joyce is fascinated by the artistic courage of Satie, but we observe their essential contrast too. Satie is a loner, someone who works without collaborators or ‘sounding boards’. Joyce craves conversation, the endless flow of words, the better to hear everything that is going on, to test his own ideas. Joyce will never just walk around his work alone before setting it before his public.

Another lightbulb moment is provided by that lightbulb Mae West. While only angling for a part so far as Chaplin is concerned, Joyce is impressed, in a letter received, by her worldly way and humour. Joyce and West have something in common: they’re both scriptwriters. They know what it means to put together words that land them in trouble. They could end up in jail for telling the truth as they see it. The chances of Ulysses not being transferred into another medium (or even through the customs at New York) could have less to do with challenges of form, than moral content that offends the wrong people. They share an ambition to go to the edge. Mae argues persuasively with Jim that, especially on the subject of sexuality, though she doesn’t “want to take the credit for inventing it” she did “in a manner of speaking rediscover it”, and in a different way so has Jim in Ulysses.

Giant cement mixers and construction lorrys line the street near the next pyramidal highrises.

The verdict of public opinion, the critics, and Joyceans is that none of the known films of Ulysses do anything to represent the richness and depth of Ulysses, the life found on every page. The films, whether in back-and-white or colour, are pale. Their conventional narrative techniques turn a novel in which nothing happens into a film in which nothing happens. A book that creates the appearance of parallel activities at one time, that describes in intense detail the experience and ideas inside people, that deliberately utilises varieties of style and device, that is in itself, in a word, cinematic, seems to have defied every film interpreter’s efforts.

Sleeping yachts clinked at steadying moorings inside the ‘moreblue’ marina.

Chaplin, in the play, knows what he’s up against. When Joyce chides him for a scene that seems “a little theatrical … rather than just happening naturally,” he reacts: “Don’t give me that old Naturalism cant, Jim. Actors with their backs to the audience just for some kind of naturalistic effect. I want to be free to use whatever I believe will do the job … titles, stills, magic, fantasy … The Naturalists hate all that.” Chaplin knew the true potential of film, but even in the Bloomsday script he plays his own kind of cinematic artist, with his own limitations, the loudest being silence itself, as Joyce points out. How make a movie about language with no sounds?  “Titles, stills, magic, fantasy” are some of the permanent things with which great movies of Ulysses could be made and in this Chaplin offers a fresh challenge to our thinking. Film-making today is readily available to everyone with an interest. Films can be made by anyone anywhere, without the demands of studios and box-office audiences. Films of Ulysses could be put together by individuals or collectives with the same artistic freedom depicted in the Paris twenties of the The Reel Joyce. Some of the best Joyce moviework is found online, rather than in the catalogues of World Cinema. Furthermore, if Chaplin’s  “Titles, stills, magic, fantasy” is Joyce’s variation of “Parallels, correspondences, epiphanies, monologues” then both artists are showing how any artist has the materials to make something multi-layered and rich out of the material. But do they have the means and will? When a composer (from memory the American George Antheil) wished to make some music based on his work, Joyce was most enthusiastic about the ideas that pushed the extremes of musical form itself, not with those where the rendition succeeded, but with no lasting effect. This tells us a lot about the constant creative questioning and expectation of Joyce’s own artistic mind. It tells us why worthwhile movies of Ulysses are possible.

Computer galleries and ping-pong rooms fell silent when the Library closed at nightfall.

My concluding afterthought is about Ulysses readers. There is no great Ulysses movie because not one director gets to where Joyce’s readers find themselves already, at the outset. The story can be repeated on a wiki-stub, its main details reduced to a few sentences. It’s reducible, whereas readers know Joyce because of the consciousness that he creates in them. Seeing Dedalus on the Strand in a film is a world away from being inside his head walking into eternity, the way they do in the book. Bloom’s hot experiences at the hands of Bella Cohen may raise an eyebrow at the movies, but in the book the reader has been through the full monty by reading every in-and-out of Nighttown. Molly is comely enough in her jingling bed in a movie, while in the book the reader has already gone everywhere imaginable with her, and is carrying the memory around in their head, until next time. The really impossible thing for a filmmaker is to meet the level of consciousness of character, time and place that James Joyce has instilled in his readers through the techniques at work in his separate episodes. 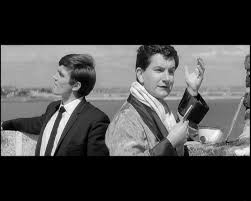