Day 10
How many people read the same novel every year? I don’t mean the video, I mean read the book. Academics with a syllabus, perhaps. I read parts of James Joyce’s two big books every year to write scripts, seminar papers, lyrics, and other things for the annual festival of Bloomsday in Melbourne. I re-open the pages somewhere and two things always happen: the pleasure aroused by the beauty of his language, and laughter. Odysseus took a Latin turn sometime and became Ulysses. Here are 100 words on the title word:

Ulysses navigates its way into English in the seventeenth century, the body of a boat, a mast, a prow ploughing waves of esses. You-list-seas, though Joyce’s Irish was Who’ll-is-ayes, or even Ooooh-lessees, a susurrus of Aegean in its wake. His Ulysses is a wanderer, but deceit (an Homeric attribute) is not in him, only an impromptu cunning. He’s cheated in June who by July will be home again, again. Joyce wrote of his “usylessly unreadable Blue Book of Eccles”, for what’s literature but no-man striking the one-eyed monster? A siren’s song to crash him on the rocks of real life? 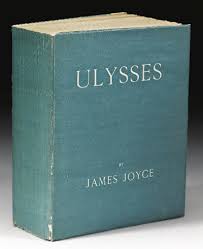