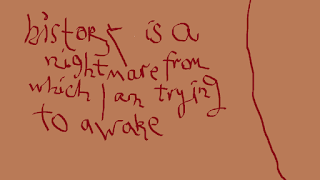 This year’s online Bloomsday seminar via Facebook was a global conversation in the privacy of our own screens. Each of the eighteen short films, released online by Bloomsday in Melbourne at the hour set for each episode, were treated as the ‘papers’ to prompt online discussion. Episode 2 included contributions by Gloria Bella, Steve Carey, Sian Cartwright, Frances Devlin Glass, Tony Guyot, Gay Lynch, Sabia Mac Aodha, Janet Strachan, and Maireid Sullivan, whose initials appear where their thoughts are represented in these analecta.

The much-quoted line: “History is a nightmare from which I am trying to awake.” Even here, can we be sure Dedalus is talking for himself or about his sleepy students, having to listen to such stuff? Is he perhaps empathising with his drowsy charges?

The relationship of teacher to student must resolve the perception of the teacher seeing himself in the classroom he once occupied as a student. It is not possible for Dedalus to find that resolution. He must depart school a second time, this time as a teacher. He resolves to be a learner, though teaching is to the fore by the time he arrives at the National Library in the middle of the day.

Each appearance of Dedalus in a new episode alters the reader’s understanding. He is a troubled poet, now he is a frustrated teacher, then he’s a wandering sensualist, later he will be an enraptured philosopher, or a drunken raver, or messed-up patron of a brothel. This wannabe somebody falls short of achievement in every episode, an extension of the Dedalus sobriquet given to him by the author so many years beforehand.

The exterior young men develop to deal with the world they grow into; we know about it. When is the time to be gentle, when is the time not to let that show? (FDG) When is the best form of offence defence? And vice versa. Who’s to know. Time to break through and talk. Time to let it show. Sooner rather than later.

Dedalus a study in compassion, Deasey a staccato big noise. (FDG) We talk about foils, but unlike theatre the personal confrontations we experience in life are not about types. They are for real, one of us is not going to go down the way of denial, or lies, or half-truths. Types emerge in retrospect.

As writing with sincerity or irony are now counted as the same thing, what chance this episode will come to the attention of the new thought police? (GB) Unhappily too true. Dedalus’s dissent hopefully makes the satire plain. (FDG)

“The one duty we owe to history is to rewrite it.” (Oscar Wilde) We could hold a seminar on that (MS), but where to start. We could say ‘Bloom is very much present’ (JS) and pay attention to Bloom’s whole character as a continuous rewrite of history. We could look at Joyce’s understanding of pathology and of ‘history as a series of baleful repetitions”. (FDG) Past, present, and future and how Joyce explains these states is fertile ground for a whole performance, a wide-ranging seminar.

I observe how the pandemic is turning into relief our very relationship with the past. The future is blocked so we look harder at the past, with less illusions. We are being asked to post our teenage photographs on Facebook (why?) or protest worldwide against racism, especially as a basis of imperialism. A world with a certain future is one more likely to thrive on illusions about its past.

Does Joyce have extra senses, more than five? (SMA) His ability to connect thought and body is wonderful and an attack on dualism. He does this by connecting the senses and showing how they interact and behave together with the mind. He is fearless in showing how this happens. Furthermore, this is being done not in an academic dissertation but in a wild novel.

Joyce’s ability to overview with heightened perception and insight the past, present, and future. Is this a foreboding? (SMA) Joyce is very concerned about history and how we live with time. His last book is an obsessive account of how to live with the spiral, or is that a jigsaw puzzle, or is that a drunken spree, called history. If we awake from history, what do we see? Dedalus’s saying takes on a koan-like quality, open to lasting contemplation.

Can we wake up now please? (TG) Dedalus may well be an avatar of Joyce but he’s on about something we wish humanity was somewhat more aware of. (TG) At the very least, this episode alerts us to the need for an historical imagination, to be aware of what is around us and to identify the signs. Joyce, in a sense, is waking up the reader to the activity of time. And early in the book.

Dedalus may be a person in mourning, but he’s certainly not a morning person. (Steve) Young men with a need for total control cannot show much gentleness. Dedalus must exert his ego, his ten thousand ideas, upon the world. This can make him difficult company at breakfast.