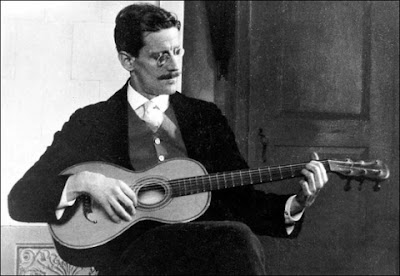 ‘Performing Joyce’ was the name of the 2005 Bloomsday in Melbourne seminar. Jim Howard and Di Silber talked about the role of costume in creating Bloom, Lewis Fiander discussed adaptation and performance in his celebrated one-man show A Portrait of the Artist as a Young Man, and Professor Dick Corballis of Massey University in New Zealand spoke about the evolution of the haka page in the Wake. Rod Baker, Trish Shaw and I talked about the evolution of texts for their musical settings of two songs. This is my paper given, with Rod and Trish doing the singing, during the seminar in the State Library of Victoria, June 16th 2005.

The great Italian opera composer Giacomo Puccini claimed that the words to songs were immaterial and skited that he could set anything to music, even a laundry list.

The great Russian composers Igor Stravinsky and Dmitri Shostakovich only ever met once. Their entire conversation at an official Moscow function in 1962 went thus:

Unlike Puccini or Stravinsky, Shostakovich did write music to a text that falls into the category of ‘laundry list’. It is the infamous Zhdanov Decree of 1948 which, amongst other things, condemned the music of Shostakovich as formalist. Shostakovich turned it into a satire entitled ‘Rayok’, meaning ‘The Peep-show’, ‘The Gods’, or ‘A Learner’s Manual’ – take your pick! Let me quote some of the text:

In ‘Rayok’ these lines are sung to the folk tune ‘Suliko’, which happened to be Stalin’s favourite song. It is not surprising then that the premiere of ‘Rayok’ was directed by Mstislav Rostropovich in Washington in 1989 and that the copyright for this text is Boosey & Hawkes, London, 1990. ‘Rayok’ was kept a secret for forty years.

What this illustrates is the fact that indeed any text can be put to music, but that its meaning is dependent on context, tradition, and perhaps most important of all, the motives of the composer. The Zhdanov Decree was a deadly political tract that destroyed musical creativity in the Soviet Union for a generation, a supreme expression of mundane thinking. Shostakovich turned the words into parody, undermining their authority and exposing their ignorance.

‘Rudy’s Song’, sung and performed here by the composers, Rod Baker and Trish Shaw, was written to meet a performance challenge. The brothel scene in ‘Ulysses’, the longest episode in the book and called ‘Circe’ by the gnostic elite, is one of the delights of Bloomsday scripting, but also one of its great challenges. James Joyce uses play directions, songs, dream sequences, complex dialogue strategies and other devices. Leopold Bloom is put through the hoops. He finds himself in dozens of startling positions, both physical and cerebral, and many of these positions were demonstrated at the Savage Club in 1997, using a script that employed lots of ghastly good taste in the noble tradition of Bloomsday in Melbourne. There was one difficulty: what to do with the conclusion to ‘Circe’. When high brow meets low brow the result can be a headache for the scriptwriters. Bloom, in company of Stephen, departs the hothouse of Bella Cohen only to encounter some ugly drunken soldiers spoiling for a fight. Bloom rescues Stephen after a nasty scrap. He begins to see in Stephen a lost son. That blessing of recognition all of a sudden reveals to Bloom a further interior vision, if you like, of his own son Rudy:

Silent, thoughtful, alert, he stands on guard, his fingers at his lips in the attitude of secret master. Against the dark wall a figure appears slowly, a fairy boy of eleven, a changeling, kidnapped, dressed in an Eton suit with glass shoes and a little bronze helmet, holding a book in his hand. He reads from right to left inaudibly, smiling, kissing the page.

The death of Rudy as a boy is one of the secrets that Leopold Bloom carries with him throughout the day. Like other secrets of Bloom’s, the loss of his son exists on or just below the surface of Joyce’s text. Joyce never labours the deep meaning of this loss: Bloom has lost his male heir. The loss clearly has had a profound effect on his relationship with Molly, at many levels. The intimacy of Bloom’s vision at the end of ‘Circe’ is achieved by surprise, an otherwordliness of placement, and a complete alteration in style from anything we meet elsewhere in the book. Reading these words aloud cannot equal the silent reading experience we have here. So, if it cannot be said, then sing it. What cannot be said should be sung.

The motive of the composer was therefore, in some way, set. We needed song to make intimate and real what could not be made intimate and real by straight reading, silent performance, or tableau. The rash and chaotic action in the redlight district that stirred the previous hour of performance was hushed to nothing by the reduction of lights and the singular voice using Joyce’s words of magic and dream. The inexplicable inner feelings, impossible to express, are expressed as they are on the page and given to the audience without cue, and without further explanation.

The next song you will hear is the duet for Leopold and Molly, composed again by Rod Baker and Trish Shaw for Bloomsday.

Last Saturday’s Age contains a very useful introduction to ‘Ulysses’, in particular the language of ‘Ulysses’, written by Peter Craven. Peter’s article nevertheless repeats the commonplace preconception that “Bloom … wanders around Dublin trying not to think how his wife, Molly, is being unfaithful to him,” and that Bloom is a “not very educated, rather bumbling chap whose wife cheats on him.” This reductionist contraction of the relationship to a simple case of infidelity is seriously misleading. The 16th of June happens to be the day when Molly’s dalliance with Blazes Boylan reaches its climax, but all of ‘Ulysses’ is brimful of the Blooms and their lives together. Indeed, their love for one another is one crucial abiding factor in the whole story, a love that we learn about through memories, psychological association, the chat of acquaintances, oblique asides – everywhere. And, if La Rochefoucauld is right and all passionate love has about it an element of jealousy, then Bloom’s love is all the fiercer for that. The entire book is a duet between Leopold and Molly, even if there is not one interchange throughout that could be called a duet. Internally they speak to one another all day. Perhaps the greatest tribute of all to that love comes in Molly’s monologue at the end, where her attention moves slowly from past lovers to the very recent past with Blazes, only then to shift as though inexorably toward – who else – Leopold, the man most on her mind. By the end of the monologue we are left to understand how it is that Bloom is the real key to Molly’s sense of love and belonging.

So, set the task of arranging words for a duet in 2002 Bloomsday, we made a close reading of the monologue, looking for any snippets that expressed feelings and sentiments Molly had for Poldy, and vice versa. Some of that verse was very much vice, it must be added. The characters give almost no leeway, no leads in terms of direct expression about one another. It was necessary to search elsewhere in the book as well to collect small lines that could suit the purpose of constructing a dialogue. These could only be words directly attributable to the two lovers. Having culled a large collection of such Joycean phrases, not all of them by any means grammatically cogent, the lines were selected and arranged for the composers to set to music.

she understands all she wants to

pleasant to see first thing in the morning

make hay while the sun shines

she runs to meet me, a girl with gold hair on the wind

counting the strands of her hair, smiling, braiding

man and woman, love, what is it?

the sun shines for you today

I kiss the feet of you senorita

nice name he has

that was one true thing he said in his life

he felt what a woman is

two glancing eyes a lattice hid Ill sing that for him

I would too in half a minute

I cant help it if Im young