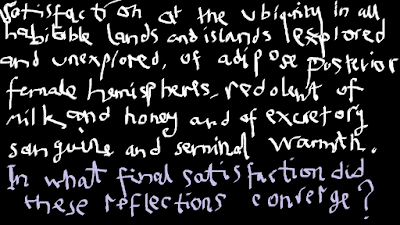 This year’s online Bloomsday seminar via Facebook was a global conversation in the privacy of our own screens. Each of the eighteen short films, released online by Bloomsday in Melbourne at the hour set for each episode, were treated as the ‘papers’ to prompt online discussion. Episode 8 included contributions by Michael Cooney, Frances Devlin Glass, Heather McKean, Margaret Newman, Claire Pedersen, and Beverley Price, whose initials appear where their words are represented in these analecta.

Best catechism ever! (MC) Which raises the whole question of can there ever be such a thing as a ‘best catechism’. It’s unlikely that Joyce wrote the penultimate episode of Ulysses with the intention of winning First Prize in the Catechism of the Year Awards. Pravda offices throughout the world, in every organisation and every government, do not publish their Q&A manuals for their originality, their groundbreaking outlook, their provocative thesis. Their aim is to provide everyone with the pre-prepared answers that their people will need in order to have a firm grip on Pravda. Joyce’s procedure intends to satirise and even debunk all such manuals of institutional certitude. His target is not just the pedagogical methods of the Catholic Church in regard to dogma but any doctrinal finalities, be they of science, politics, aesthetics, philosophy, &c. The entire Ithaca catechism trials the nature of conditionality, contingency, uncertainty, all the straggly untidy bits that final explanations cannot quite explain. It does all of this with its tongue firmly in its cheek. But while doing so, the Ithaca catechism offers a view of existence, the universe, and the straggly bits that is itself marvellous to behold and worthy of closer attention.

We recall Stephen in the classroom that morning, working though the textbook and not overly thrilled with its dry certainties about history. Like Joyce, we notice how school textbooks go through editions. The answers to all the questions in 1950 are not the same as all the answers in 2020. Pluto, for example, is no longer a planet. The deepest ocean trench in 1904 is the still the deepest in 2020, but in 1904 it was thought to be near Java. Later editorial efforts to locate the trench near Guam are anachronistic in terms of the time setting of the novel, only showing how textbooks, like catechisms, are themselves products of time. Editors at their slavish task of getting it right and keeping up to the minute, fail to get the joke. The joke may even be on them.  Ulysses sails on above the waterline.

What imagination, to transpose complex Joyce into a quiz show. (HM) Including an ad for Plumtree’s Potted Meat. (CP) To film the episode as a quiz show is a step that Joyce has already taken by transposing fiction narrative form into a catechism. I imagine Joyce would have been even more merciless and edgy in his use of that format than the Bloomsday scriptwriters.

‘Great detailed Kitsch!’ Oh! That was Kinch? Drop the capital K! (MN) Books are written on Joyce’s use of high and low art. His works of high art contain extreme numbers of references to works of low art. The author leaves it to the reader to judge the tastes of his characters, and most importantly the Blooms. It’s hard to say if Joyce is being democratic, or just describing things as he sees them. Whether Joyce is judging Bloom himself based on his artistic interests is difficult to decide: the author is out of the picture, presenting us with a story for our enjoyment.

It has been many moons since I have read any of James Joyce. I remember reading Ulysses. At the time I didn’t appreciate his genius. (BP) To return to the books after some time is to see with fresh sight. An appreciation of Joyce comes not only through recognition of his sustained artistry but also through his questioning of social norms, as some would say, his irreverence. That irreverence extends to Joyce himself, whose literary legend is always at risk of itself becoming a norm. It is good not to be reverential of Joyce, to take leaves from his book and adopt his methods. This year’s film of Ithaca does what Joyce might have done with it, which is to turn it inside out. Writing Leopold and Stephen’s midnight cocoa as a spoof catechism is a crazy step, and in the spirit of that craziness, the actors have gone further, turning the backwards-and-forwards-questions into a stupid TV quiz show. Introducing women’s voices into an all-male bromance is something new also, in fact quite subversive of the critical convention of lost father and lost son united, typically adopted without question-and-answer by Joyceans.