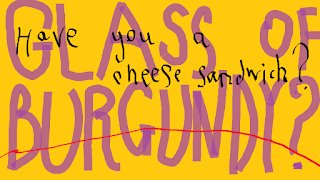 This year’s online Bloomsday seminar via Facebook was a global conversation in the privacy of our own screens. Each of the eighteen short films, released online by Bloomsday in Melbourne at the hour set for each episode, were treated as the ‘papers’ to prompt online discussion. Episode 8 included contributions by Steve Carey, Sian Cartwright, Sue Collins, Frances Devlin Glass, Margaret Newman, and Elle Rasink, whose initials appear where their words are represented in these analecta.

Here is an invitation to chew over this menu of statements and extras.

Bloom’s sensuality and his responsiveness to tastes. (FDG) Sounds and words through the ears; colours and images through the eyes; aromas and scents through the nostrils; sensations of the skin; taste and texture in the mouth – all those are prompts to his thoughts and memories, so that read and heard aright, everything Bloom experiences happens in relationship and every one of his words is connected to some clue elsewhere in the text.

“The feety savour of green cheese.” (Sue) This line is a microcosm of Joyce’s courageous intuition. Another writer would never dare or dream of keeping such a word, a word unused in English for centuries, but that he reintroduces as an outrageous pun to identify a very strong cheese. Such is his vocabulary, Joyce springs surprises like ‘feety’ with exciting regularity.

Wine and how it works. (FDG) Bloom’s lunch consists of two imports, Italian cheese and French wine. Modest and civilised, his meal is the model of healthy eating compared to those being consumed elsewhere in the city, the gross offerings of Irish fare described with excessive distaste by the author. Gorgonzola and Burgundy, though Bloomsdayers usually overlook the fact that Bloom would also like some olives, if Davy Byrne’s has them, preferably Italian olives.

Yes, quite a poignant recollection of Howth, beautiful and sad. (Sian) The backstory of Molly and Poldy’s romance is at the forefront of his mind throughout the day. Indeed, as we eventually find out, it’s not far from the front of her mind either. The early courting days lead rapidly to the reasons things have fallen apart maritally for them. Poldy’s needful memories at lunch are affirmed powerfully during the ultimate moments of Molly’s own memories.

To bat above one’s average. (Steve) Bloom bats above his average not just in the colloquial sense of his relationships with women, but in so many areas of his life. A critic recently called Bloom uneducated. One can only assume it is some time since that critic went in to bowl at Bloomsday. Every page where Bloom features, and many more where he is present in spirit, reveal an enquiring mind, a person who will always be learning, someone who carries with him an education that is both encyclopaedic and other. Other, in that Bloom’s knowledge expands far beyond the confines of an Irish education as exemplified in those he meets throughout the day. His observations of Dublin life, his counterpoint to the opinions of those around him, even his choice of food for lunch, make him stand out in the crowd, though we also know that Bloom is socially undemonstrative. Like Molly, whose words betray her sense of having come down in the world, Leopold is both insider and outsider in Dublin. Their life together includes an awareness of their shared outsider status. In this way they go about in marked contrast to Dedalus, who will never be an outsider. For all of his education, Stephen knows there are things missing in his understanding of the world; he needs the education that Bloom can provide. He is like the author. It wouldn’t matter where Joyce went in the world, he was always going to be a Dublin insider. But his maturity, his opening out to a world beyond that of Ireland, came about through meeting the Italo Svevos of that world. Joyce was never just going to keep a straight bat. He was learning all the strokes and shots.

Your heart just goes out to him. (ER) Surely one of the most remarkable achievements of this story of an adultery is Joyce’s non-judgmental and sympathetic portrayal of the couple. His sheer range of thought and emotion, primarily with Bloom, leave the reader likewise with an understanding of both Molly and Bloom. His losses are constantly being balanced by his gains, i.e. his choice of life in all its abundance and variety. We who share Bloom’s inner world gain from his largeness of heart. He is passive before his betrayal by Molly, yet it is easy for us to cut him some slack for his lack of assertiveness.

It’s all a lot to keep up with. (Sue) Bloomsday was not built in a day. It’s like someone’s private encyclopaedia. Bloom possesses an immense amount of information, but how much of what was fact once has changed and will change again, it’s anyone’s guess. This not some gradgrind of an encyclopaedia. To read all the facts of Bloom’s existence seriously, as we do with an encyclopaedia, is to miss the essential comedy of virtually everything that passes for information in Bloom’s world. There is no index. Furthermore, the extensive apparatus outside Ulysses meant to explain Ulysses can only explain the information; it’s light on for laughs. The more often we read Bloom’s encyclopaedia, the more jokes we notice, the more we enjoy Joyce’s unswerving humour, the more all those indexes get in the way.