In an email of 23rd February 2015 Max Richards (1937-2016) writes: “another blog piece or E st article, Philip, one day if not now, best from Max”. Attached was an enlarged image of Mark Twain’s unsolicited judgement of John Dryden’s work on Plutarch’s Lives. This title page had been circulated by the Oxford Marginalia Group. As a minor service, I thought a few reflections on this page were now due. 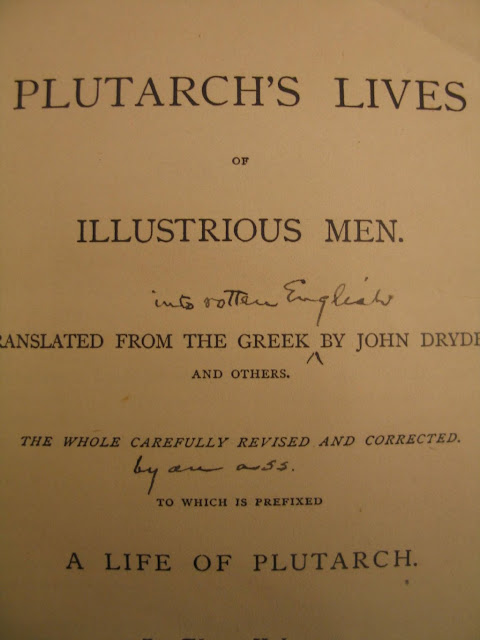 Possibly the least read of the canonical Great English Poets today is John Dryden. He was someone we were relieved to move on from in University days, not because the poetry was “rotten” but because Dryden’s references and milieu had become so obscure. We were taught that he is integral to “the line of wit”, a critical construct employed to argue that there is such a line running right through English writing. Anyone belonging to “the line of wit” was in a charmed circle of acceptance, their credibility undimmed. We could see right off, his verse was nimble and nifty:

Of these the false Achitophel was first,
A name to all succeeding ages curst,
For close designs and crooked counsels fit,
Sagacious, bold, and turbulent of wit.

He was a premonition of the 18th century dance of barbs, couplets, and backhanders. The purpose, and therefore the rules, of this kind of artifice had broken down by the time Mark Twain first peeped into Dryden’s translation of Plutarch. Twain was equal to Dryden in having an eye for pretension, an ear for vernacular truth, and a mouth from the south. But Twain’s relationship with European heritage was not about restoring the grace of an imagined earlier time. He was a Yankee tearaway, abounding in stories of the immediate present, with a different set of injustices needing to be set right.

Possibly the most read canonical Great American Novelist today is Mark Twain, which is why an innocent reader may blithely believe that Twain is right, Dryden is “an ass”. My researches online provide no background reasons for Twain’s hyper reactions. One blog calls them “viciously funny”, but the viciousness and the funniness wear thin without some explanation or insight into why. Why does Twain find the English “rotten”? “Rotten” could mean anything. Anyone can say there is something rotten in the state of Shakespeare, but it makes no difference to Shakespeare’s fullness and shininess. The problem is with the reader. The author of ‘Midsummer Night’s Dream’ may be an ass, but that’s no matter.