As said in the Denise Levertov essay on this site, really the Opening to this collection of records and responses to the death of Max Richards (1937-2016),  I have been spending time thinking about Max’s long interest in religion, of faith lost or found. He taught on this subject as an English Professor at La Trobe University, but it's challenges were always personal and he had both a serious and a bemused consideration of what it might all mean. As for example in this brief exchange of emails, prompted by his awareness of my keen interest in the writings of Lesley Chamberlain, especially her work on Russian spirituality and philosophy. The Les in “the big les discussion” is not a reference to Chamberlain but Les Murray. That month I conducted a reading group at the Carmelite Library on spirituality in his poetry. 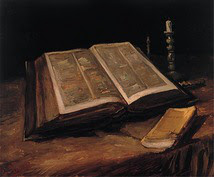 
Van Gogh and The Joy of Living

Remember Van Gogh’s 1885 painting Still-life with Bible? Here it is, number 117 in De la Faille’s catalogue. You can see the original in the Van Gogh Museum in Amsterdam.

The Bible though it glows with authority is illegible. You can just see in this reproduction the while smudges that the artist used to create that effect. Meanwhile the novel, by Emile Zola, and clearly labelled La Joie de Vivre, waits to be read as the new gospel. The painting reflected Vincent’s tense relationship with his father, Pastor Johannes van Gogh. VvG had tried and failed to make the Christian mission his way of life, although not, according to his sister, without becoming ‘groggy on piety’. A turning-point was his rejection by the Church in Amsterdam on the grounds that his Latin was too poor. What do I need Latin and Greek for in order to help people? was the painter’s adequate reply.

Thanks Max. I had no idea Lesley Chamberlain had a blog.The paragraphs here do not surprise me coming from LC, who has an arm's length attitude to religion. I don't share her view of the painting or of Van Gogh. Tolstoy was one of his heroes, and I mean late Tolstoy, the full-on abandon everything Tolstoy. His art moved way beyond the confines of Dutch life, but not Christianity. Interesting that she is taking up Zola, I wonder where it will go? Philip


I almost made it to the big les discussion, but our man at westpac foiled me by a date with him unavoidable.


Hoping you had a good time without me.


And hoping to make it next time.


As for Van Gogh and God, I have just stumbled on this -


this from wikipedia on hugo, glanced at because I have begun Les Mis in the new Vintage trans by Julie Rose of Sydney, though how far I will persevere is hard to say.


Best to you three from Max


about to see whether Parsifal the met movie at the nova is something we are strong enough to see through...