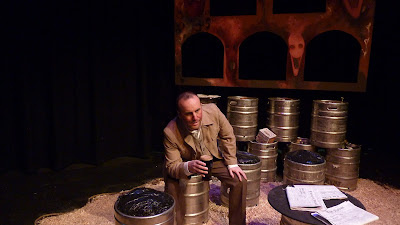 Silas James as Bar-Fly in Barney Kiernan’s, Bloomsday in Melbourne 2011

Mid-June is the time of worldwide Joycean events, especially in Melbourne. In 2011 Bloomsday in Melbourne produced a theatrical piece about nationalism, Irish and other, centred on the Cyclops episode of Ulysses. My subsequent report (re-published this day on this blog) is what Max Richards (1937-2016) refers to in the oepning of his email of the 19th of June 2011, three days after Bloomsday. Max had celebrated the Day at Geelong Art Gallery, where various events to do with James Joyce had been enacted, including a show of artworks by Barry Gillard.

I shall read your Bloomsday report tonight, most likely, keenly.
Here is a mixture of fragments of the Geelong experience... […]
I was asked weeks ago to provide the Gallery with a ‘bio note’ so they’d introduce me accurately.
This is what I wrote – I was sorry not to hear it read out. What the others provided I dunno...

Max Richards as a toddler was photographed sitting on his Irish migrant grandfather Robert Guthrie’s knee while he did not sing the Donegal version of Finnegans Wake.
He first read Ulysses under the great Robert Burns scholar, Thomas Crawford, at Auckland University. Tom once knocked on the convent door in Greymouth New Zealand and asked to see James Joyce’s sister the nun. He was turned away.
Max has visited the Burns Country, John Keats House, Walter Scott’s house, the Bronte Country, the Yeats Country, but never Dublin!
At La Trobe University he once supervised a feminist research essay on Joyce and the women in Ulysses.
Max writes poems set in New Zealand, Scotland, England, the United States, and Australia, but not so far Dublin.

Oh maybe it’s as well they didn’t use it.

Next: as already reported to another:

The room showing the joycean (etc) artworks of Barry Gillard filled with lunch-hour folk nicely. The mistress of ceremonies welcomed us all to 'Bloomsburyday'. Those of us who noticed kept a straight face and she went uncorrrected.
Gillard spoke briefly about his inspiration and his mysterious artworks, all of which have inscriptions, some of them joycean, others blakean, others...

Reading second of the three in the Geelong Gallery in the presence of Barry Gillard and his art works packed with literary allusion, Joyce, Blake and more... I didn't exceed my eight minute word limit, got some laughs from the paras chosen from Mr Leopold Bloom ate with relish etc.
But Marilyn said I mismanaged the mike, just as I did recently at the wedding in the Chloe room of Young&Jacksons struggling with the bridal couple's choice from the Sentimental Bloke, the chapter called ‘Hitched’...

Immediately spent my fee on lunch for three at Ripples overlooking the water, Marilyn's old friend Marilyn Mcinnes having come up from St Leonards. Her experience at the gallery didn't make her want to tackle Ulysses. The dessert was snapped for M's facebook page.

Later, at Brendan and Alison Ryan’s Highton house, recently they sold up in Portarlington and are still settling, we had a good chat with Gillard, a Reservoir boy, who like me has yet to visit Dublin. He is clearly an educated and driven artist, with deep connections with what he reads. I felt his works attractive but confusing, and hope they will be shown beyond Geelong.

Scrappy report this, maybe other aspects worth mention will come to mind later.
Very best from Max