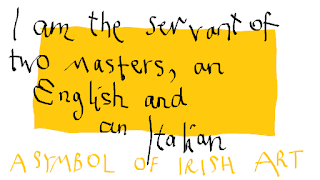 This year’s online Bloomsday seminar via Facebook was a global conversation in the privacy of our own screens. Each of the eighteen short films, released online by Bloomsday in Melbourne at the hour set for each episode, were treated as the ‘papers’ to prompt online discussion. Episode 1 included contributions by Frances Devlin Glass, Paul Grabowsky, Trevor McClaughlin, Margaret Newman, Elle Rasink, Ted Reilly, and Christopher Reynolds, whose initials appear where their thoughts are represented in these analecta.

I am caught from the first word. Intrigued as to which path we are being taken. Lead on! (ER)I am enjoying this! Ulysses is meant to be read aloud and gleefully. (TR) Welcome to the world of Ulysses, in which people who read books talk a lot, everything from ‘getting back to the point’ to ‘now we’re off the planet’. The opening warns in advance that this story could go anywhere, that behind all the high and gleeful talk there may be meanings here that are worth revisiting. The story opens with the belief that the world is for the young. The young men approach the tipping point into adulthood, so they know next to everything. How long will that last? We note the absence of the young women of Dublin and what they might be thinking, or if any of them talk in the manner of these young self-confident men. In due course we meet the parallel world of approaching middle age, happening concurrently at Eccles Street.

What do we make of the contrast between Buck and Stephen? The one a kind of theatrical parody of the hellfire priest in Portrait, the other Dedalus, gifted, imaginative, fragile. (PG)

Joyce has kind of taken the priest in Portrait and turned him into a parody? This is an excellent connection between the two books. It raises the whole question of the author’s relationship to the priesthood. Also, his understanding of role and public performance, especially in the hands of a gifted orator. After all, in that society for many young men, priesthood yes or no was a question. If they say no, what then? His portraits of priestliness are not limited to priests. He is interested in their vested power, as it were, and the expectation of oratorical powers. Disappointment is going to follow, too often.

Buck makes mockery of everything, an extrovert act that Stephen (young Joyce) is watching and learning from. I will add on this score, Buck is a dandy, a cross of Oscar Wilde and Oliver St. John Gogarty. Oratory yes, but performance is everything, both verbal and physical. Joyce, himself a dandy, portrays himself as a prat, an insufferable fellow, as Buck says himself. Stephen wears all black in mourning for his mother, but more like, himself. By contrast with Buck, who obviously believes cleanliness is next to ungodliness, Stephen hasn’t washed for several weeks. But then, it is Dublin in 1904.

‘Twas hard to connect with his odour in the film. Not a bad thing, I suspect. (PG) Smell is about the most difficult sense to put into words. Analogy starts taking on the unlikely language of analogy beloved of wine-tasters: “a fine tang of faintly scented urine.” The expression “dear, dirty Dublin” is redolent of unwashed socks and three-day shirts, notes of noxious with a heady undercurrent of underarm and halitosis, microbe-driven. One of the most providential moments in the whole story is when Bloom visits the Turkish baths.

Buck identifies the sea as mother. Stephen is accused of killing his mother. What kind of way is this to open a Greek play? Where are the laughs?

I think this fabulous. Three brilliant men. I find the ‘scrotumtightening sea’ absolutely accepted and acceptable, part of a regular male’s life. (MN) Also known as ‘spanner water’ in Oz. (TMC) These early compound constructions gently educate the reader in Joycean wordplay, just as his line indents for spoken parts, unorthodox capitalisation and other liberties with style policing become integral to the look of the book on the page. This, in itself, is an entire creative act on Joyce’s part, in tandem with all the others.

I have now twigged to the reader (Max Gillies) persona in these films. It complements the episodes perfectly. (CR) Joyce’s inventiveness in keeping himself removed from any one authoritative authorial voice leaves us with a very modern dilemma: who is telling the story? When Charles Dickens did a talking tour, audiences were in no doubt that whichever character he was mimicking in a reading, it was always Dickens. You got your money’s worth. Even today, and more so with Finnegans Wake, it is nigh impossible to succeed in your request: would the real James Joyce please step forward. An avuncular actor in leather armchair with zoom shelfie, his eyebrows lifting and mouth emoting, it’s a comic turn, but inconsistent with readers’ experience of Ulysses. He belongs before the silent era of motion pictures, an actor in someone else’s bedtime story. But then, how to tell the story of Ulysses? Its multiple angles and aspects deny a straight transfer to stage or film. The novel prefigures cinematic techniques, while the connecting material that makes it all cohere is in small details cross-referenced all over its hundreds of pages. Ulysses invites scriptwriters and filmmakers to forego relating the action A-Z, not least because well what action? The text and its ways of proceeding invite us to take the whole experience further in the way of experiment. A hundred years after its publication, there is yet to be any film or theatre piece based on Ulysses that comes close to reckoning with Joyce’s ways and outcomes.