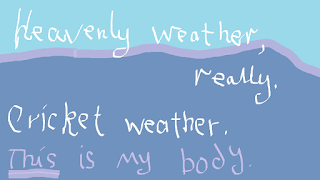 This year’s online Bloomsday seminar via Facebook was a global conversation in the privacy of our own screens. Each of the eighteen short films, released online by Bloomsday in Melbourne at the hour set for each episode, were treated as the ‘papers’ to prompt online discussion. Episode 5 included contributions by Anna Banfai, Gloria Bella, Sean Callaghan, Steve Carey, Sian Cartwright, Michael Cooney, Frances Devlin Glass, Ben Frayle, Sabia Mac Aodha, Claire Pedersen, and Maireid Sullivan whose forenames appear where their thoughts are represented in these analecta.

Gossiping about the Blooms. Frances: How does Bloom’s ‘stream of life’ metaphor play into his Hamlet-like decision not to take action to prevent Molly’s adultery? Philip: To me, something not remarked on nearly enough is how Bloom actively engages in more secrets, e.g. his Henry Flower letters, than Molly. Whether to please others or himself, much of his behaviour is best known to himself. Sian: Yes, it’s Molly who is more commonly regarded as straying from the relationship, with her affair with Boylan. Do you think Joyce is saying that men can keep secrets, yet women cannot? Philip: No, I’m saying there’s a double standard, even in our own reading of Ulysses. Moral criticisms of the book have often been directed at Molly’s behaviour, rarely at Bloom’s. We think of Molly as, at the very least, risqué, something we don’t think to say about Bloom, much. It’s Molly who is the floozy in the jacuzzi. Bloom is just the guy warming himself in the Turkish bath, not the red-light patron.

Cogitating on Catholicism. Philip: Bloom’s analysis of church practices is an example of jocoseriousness. How seriously is anyone supposed to take Bloom’s interpretations of Catholicism? Ben: I think it fits within the upper layer of the novel, that of lower socio-economic Dubliners (mostly Romans) who don’t necessarily take their religion all that seriously but follow it just because everyone else does. Sian: Maybe the perspective is unfused with Bloom’s own ideas as an ad-man, so there’s some distance. As he appears to be a bit of a sceptic, Bloom regards Catholicism as selling a religious belief in the way a canvasser might try to sell a product. Ben: For Catholics there is always the ‘get out of jail free’ card of confession. Catholics have a much more lax attitude to sin, as long as they have that ‘out’ card. Claire: Aren’t they supposed to be sincere about their repentance? I believe they are sincere enough. You would have to assume that God would be able to see through their insincerity, regardless of what they told their priest. Speaking as an ex-Catholic, it is the sacrament itself which is disingenuous.

Further rants and raves about sin. Ben: If Christians truly believed in their teaching then why do they choose to sin constantly? Philip: Why does anyone sin constantly? Ben: Because they doubt the truth of their religious convictions? If you truly believe you would spend an eternity in Hell for minor earthly infractions, why would you commit those infractions? If you believed in an eternal afterlife for your soul, why would you work to preserve and extend your lifetime in this world? Philip: My impression with Ulysses is that, when it comes to sin, Joyce has certain very serious targets in mind. Empire is one of them, whether British, Roman, or any other empire. Dublin was called the second city of Empire. Which empire did they mean? Another is violence, not least the nationalistic violence borne of empire, but also local hubris. It is Joyce’s challenge to violence that is one of the book’s most enduring values. Joyce knew violence first hand. I think it's one of the reasons he left Dublin and never went back. Another sin is Irish puritanism, which he perceives very directly in the kind of repressive Catholicism practised in his homeland.

Self-instruction in Judaism. Ben: There are plenty of allusions to the various pagan and non-Christian sources of Christian belief and practice. Philip: It’s Bloom’s understanding of Judaism that is quite central to Ulysses. We are given to believe he is a non-practising Jew but, as is common, has an intense interest in and awareness of being Jewish. So if it’s a part of his life, but how does it all fit in? To me, Bloom’s Jewish identity is largely informed by Joyce’s life in Trieste and his friendship with Italo Svevo.

Changing the subject with Bloom. Frances: Does Bloom’s passivity disturb? Philip: Not sure about passivity, but the reader is given the privilege of vicariously sharing his internal struggles. His words falter, he changes the topic of his own thoughts consciously. Frances: Self-soothing? How valiantly he keeps thoughts of Molly as far as possible from consciousness. Gloria: He changes his thinking habitually? Habitual introspection is a great way of not being in a relationship, even if you have one. Philip: This is an astute observation, not just about Bloom but about Joyce. It is telling, is it not, that after the Martello Tower and the Library, we find Stephen increasingly without friends. It is in some ways a portrait of the artist in exile, far from his family and friends in Dublin. Introspection creates poetry, and indeed much writing, and this will happen when someone lives in isolation. It is why we can be certain so much of Molly is Nora talking, her wit and shifts of speech, as she was the main person Joyce talked with all the time. Gloria: But it’s interesting that despite two severe losses in his life, and another impending one, Bloom remains buoyant. Philip: Yes, Bloom’s embrace of life, buoyancy as you say, is an abiding force through the whole novel and the whole day. We are acclimatised to his interior monologue and can mistake that sometimes for continuous introspection, whereas it is Bloom’s genialty and genuine interest in the world generally that keeps our attention. Frances: That’s what is most magical about his year’s Bloom performance by Alexander Pankhurst. In his realisation, Bloom’s face lights up from within when he’s amused. He’s a comic, a stand-up comic. Philip: The area where we are laughing at Bloom or laughing with him may always be certain. I believe there’s much more laughing with than at Bloom, and it’s Joyce who conjures that ambiguity. Frances: It amazing what we see in performance that’s on the page but only embryonic, or a better metaphor might be latent. It’s one of the reasons it’s so powerful handing Joyce over to actors to explore the text’s possibilities.

Lots about lotuses. Frances: There is a persistent subtext in this episode for oblivion and a seeking for (perhaps) zen consciousness. He is certainly seeking cape from his present predicament, but it must be questioned if Bloom is on the path of Enlightenment. That said, many of the phrases that pass through Bloom’s mind would be called koans. His life in the present is not in doubt. Frances: Bloom dreams of the East, but how well does he know it? Philip: Joyce is honest about his characters’ dreamy projections onto the East, the fantasies known today as Orientalism. Sequestered in Dublin, the citizens express all sorts of mistaken ideas about the world outside Ireland. Sean: “I wonder is it like that.” Philip: Yes, just so. Frances: The dream of luxuriating in a Turkish bath. I wonder what Bloom would have known in 1904 about sperm and its huge numbers? Is that why he is described as the ‘limp father of thousands’, or is he thinking genealogically? Sabia: Frances Devling, lass. Steve: Genealogically, I’d always thought. We are all sons and daughters of Eve, and Genghis Khan has 16 million descendants. Sian: Hmmm, I’d thought more the former, i.e. scientific sperm count, rather than the genealogical interpretation of ‘father of thousands’. Microscopes would have been around then, surely. Michael: I thought of Abraham. Philip: Sperm was first observed through a microscope by Antonie van Leeuwenhoek in 1677. I choose not to read a lot into ‘limp father of thousands’. It is the conclusion to Lotus Eaters. Joyce is describing a lotus, albeit a private member’s private member. Poetically speaking, it is Imagist, literally the floating world. My overwhelming sense is that Joyce wishes to create peacefulness and tranquillity. It is Baudelaire’s “luxe, calme, et volupté”. The whole scene is entirely non-threatening, unlike much else that is happening to Bloom during the day. It is a profound contrast to the weirdness happening down in Monto.