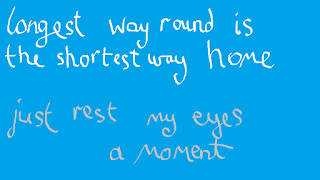 This year’s online Bloomsday seminar via Facebook was a global conversation in the privacy of our own screens. Each of the eighteen short films, released online by Bloomsday in Melbourne at the hour set for each episode, were treated as the ‘papers’ to prompt online discussion. Episode 13 included contributions by Anna Banfai, Sian Cartwright, Frances Devlin Glass, Ben Frayle, Margaret Newman, Claire Pedersen, and Janet Strachan whose initials appear where their thoughts are represented in these analecta.

How do we understand Gerty MacDowell as a character? (FDG) I think Gerty is a model of Edwardian consumerism and an avid reader of the then popular style of romance ‘chicklit’. Joyce is satirising that style of writing. She’d had her hair cut that very day on account of the position of the moon cycle, so blames the moon and her menstrual cycle for her more outgoing fantasising of Bloom. (Sian) The episode is seriously anti-romantic, though others would call it realistic. It is about fantasy on both sides, Gerty and Poldy. It raises, so to speak, again the paradox of Bloom in his relationship with Molly. Both characters are sexually active on the 16th of June, and indeed we would think Bloom had a one-track mind if it weren’t for the full content of the interior monologues.

The language of the Nausicaa episode is distinctive, but is it likely to corrupt, as the United States court determined in 1921? (FDG) Having just watched the Clinton Affair series, if Bill Clinton was judged able to continue as President of the United States, according to the majority decision of the Senate, surely this little episode can be deemed inoffensive and not likely to corrupt morals? (AB) I am not a lawyer, but I imagine that the two cases involve different areas of the law. Although the language is parodic and comic, there is something disturbing about this episode in terms of what Joyce is actually trying to tell us about how we feel and perceive. We are creatures of our own upbringing, learning, reading, and social world. We can find ourselves placed in situations where our desires surprise us, our interests lead us to unexpected outcomes. Is it by accident or design that Gerty and Leopold meet? Their chance encounter is described by an author intent on drawing patterns of behaviour. It is the content that is confronting to a reader, not the language used to enact that content. Joyce leaves us to read into the language what we wish see there, and the same is true for those wishing to judge the text as corrupting.

Not offensive to us, surely. But again, Joyce was ahead of his time in debunking (Gerty’s) femininity as a product of social and religious conditioning. (JS) Does Gerty in fact experience church as part of what prevents her full enjoyment of her sexual nature? (FDG)

Someone who is ‘innocent’ would not understand the sexual undertones, so therefore only someone who is already ‘corrupted’ (and therefore immune) would understand the references. (BF) There is, of course, no hope for those of us who are already corrupted! (CP) Joyce is having immense mischievous fun with all the innuendo and double entendre, but much of it would (I think anyway) have been much more shocking in 1920 than 2020, precisely because he is saying what everyone knows but doesn’t say. Perhaps ‘corrupted’ is too moralistic or extreme a word. Joyce’s presentation is laden with portentous and erotic imagery which is there if you want to see it, not if you don’t see it. It is a fine line between an innocent and an experienced understanding of this encounter, based primarily on one’s prior knowledge and experience.

Ulysses is so big it takes many readings to come round it. (MN) How many times do we read the book in order to trace its multitude of links? This question of repeated reading cannot be avoided. To this day, readers of novels, like watchers of TV series, expect a narrative flow. They expect earlier events to be reconciled or played out by subsequent events, as though a novel, like its spinoff the motion picture, is a time journey. Although this novel, ‘Ulysses’, has a solid timeline over the course of one day, its relationship to time past and future is not so simple. The memories of the characters are not told in order simply to explain developments in the plot, but to explain and reveal the characters themselves in their current circumstances. Memory is at the core of Ulysses. No single straight chronological reading can set out those memories in some convenient format, in part because the author is showing that memory itself does not operate like that. To begin to appreciate why Bloom behaves as he does in this episode requires the reader to learn things about him that have yet to be disclosed in the strict order of the telling, not just from information already given by author in differing ways. Some of what we understand about the beach scene is explained in the bed scene that concludes the book.

This raises in turn the question, what kind of novel is this? Or even, is this a novel at all? There are episodes where the action becomes peripheral, supportive of the main interests of the episode but secondary to the technique and import of the foreground interests. The parody of schmaltz fiction in this episode leads to the maternity hospital scenes, an entire episode freighted with parodies that take over the story and almost bury it. Familiarity with this mode of storytelling takes time, takes many readings, “to come round it.” Such familiarity even teaches us to study individual episodes for their own internal values, even to read them as stand-alone stories, rather as we might enjoy The Odyssey for its individual legends.