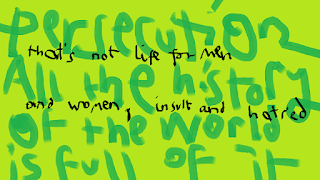 This year’s online Bloomsday seminar via Facebook was a global conversation in the privacy of our own screens. Each of the eighteen short films, released online by Bloomsday in Melbourne at the hour set for each episode, were treated as the ‘papers’ to prompt online discussion. Episode 10 included contributions by Sian Cartwright, Sue Collins, Michael Cooney, Frances Devlin Glass, Ben Frayle, Claire Pedersen, and Janet Strahan, whose initials appear where their thoughts are represented in these analecta.

I relearn from Joyce each year, as I re-read Ulysses, his perceptions of how Bloom manages the bellicose Irish male ego. When we read of Bloom’s calming presence in such places of tension as the Freeman’s Office and Davy Byrne’s pub, Joyce seems to be siding with those who listen, rather than those who just want to be heard. You could make a film of Ulysses focused entirely on this one theme, which runs through the whole book. Novelists generally relate to people who will listen, not least when they are listening to them.

In this episode two narratives alternate. The first is that of send-ups of Irish Celtic mythology, beloved of many nationalists. Extravagant, gargantuan, nostalgic, and in many places exuberantly anachronistic, these polychrome passages could be spoken by an advertising executive, a tourist pamphlet, or a demented poet. He satirises the expressive styles of the very source material he values, that he would make us aware of.

In this episode two narratives alternate. The second is in the voice of an unidentified witness in the pub, laden with incipient violence, some of it directed at Bloom. Realist, naturalistic, tense, and increasingly threatening, these black-and-white passages rotate around a one-eyed nationalist bigot called The Citizen. It culminates in the expulsion of Bloom by attack from a flying Jacobs biscuit tin. Thus, the author would have us hear vying voices of nationalism in our heads, one sentimental and romantic, the other belligerent and chauvinistic. Irish legends turn into ‘cartoon graveyards’ (Paul Simon) at the hand of this author. Irish dogmatism explodes in rallies of half-baked history and laughably contradictory Catholicism.

What about nationalism is useful and what excessive in this episode? Does Joyce have it both ways by making The Citizen the voice of grievances, legitimate or not, while at the same time a bigot who would exclude those not like himself from the citizenry? (FDG)

But is that not the way of bigots and autocrats? To take a legitimate public grievance or issue and bend and extrapolate from it to suit their own circumstances? Responding via love, as Bloom suggests, is really incomprehensible to the Cyclops, or Citizen. (Sian) It’s as relevant now, and here in Australia, as it was then in Ireland. (JS) Yes, this is a remarkable moment in the novel. Some people say it is the one moment when Bloom is truly heroic, when he stands up to the bully and says, in words that could sound childish, just what the answer is to hate. While The Citizen loudly and unthinkingly blasphemes the name of Jesus, Bloom enunciates the Golden Rule in quiet tones.

What are we to make of the comparison of Bloom with Elijah in his fiery chariot? (BF) It is a sign of things to come, especially in Oxen, and also in the vision of the New Bloomusalem. The use of the name Jerusalem in the pub appears to be the trigger for Bloomusalem later in the day at the brothel. The use of biblical personages as symbolic signs is a bold strategy, figuring mainly around Bloom and his Jewish identity. As so often with Joyce it is paradoxical. To what extent we take any of this seriously, or as pure humour, is up to us, and the epitome of what is meant by jocoseriousness.

Becoming more conceptually complex as the day darkens into night. (Sue) I’m enjoying the growing experimentation in style and form as we go along. (MC) The longer we read Ulysses, the more we adapt to the concept of each episode being written according to its own technique. Gaining an appreciation of the mode of each episode aids immensely in our reading of them, and of the levels of humour that we might have missed the first time.

Cyclops: interesting title for this chapter. (CP) There are no chapter titles in the book itself and the Homeric equivalents are only used nowadays as terms of convenience. The Citizen as Cyclops is one of the more direct parallels in an episode; in some of the episodes the parallels are well-hidden, subsumed, or scarcely a main lead for how to interpret what’s going on. Any chapter headings would have the demanding effect of reading Ulysses as a slavish copy of the Odyssey, which does not seem to be Joyce’s intention, nor would it serve the extra-Homeric complexity of influences that he demonstrably utilises in each individual episode. Joyce was not a galley-slave deliberately repeating the same old strokes. For me, Homer is to be regarded lightly in Ulysses, a guiding presence but not a heavy hand. Later in life, Joyce would express mild regrets that the Homeric frame of Ulysses was overdetermined, that it got in the way, and such concerns. This is simply Joyce the artist in the process of questioning his practices. In truth, we know that the frame is not just a frame, but a way of having a conversation with the past, with the classical world, and with literature. He contracted himself to write an epic, it was a gradual process, but the material at his disposal was the world he knew, post-famine Ireland.