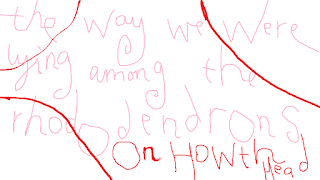 This year’s online Bloomsday seminar via Facebook was a global conversation in the privacy of our own screens. Each of the eighteen short films, released online by Bloomsday in Melbourne at the hour set for each episode, were treated as the ‘papers’ to prompt online discussion. Episode 18 included contributions by Bruce Beswick, Steve Carey, Sian Cartwright, Marie-Chantal Douine, Frances Devlin Glass, Elle Rasink, and Janet Strachan, whose initials appear where their thoughts are represented in these analecta.

Molly Bloom speaks to us, but past us with her desires, dreams, and memories.

Every episode of Ulysses has background noise, foreground noise, other voices. Only the end episode of the opening, i.e. Stephen’s walk on Sandymount Strand, and the end of the whole story, i.e. Molly’s hyper-languid thought patterns, are personal testimonies, made in glorious isolation, about the world they know so well. They own their own noise and voices, but their lively existence is inside thinking out, whether on Dublin Bay to the four winds and the world’s imagined corners, or with Bloom ‘home from the sea’ snoring at the end of the bed.

Theorising about Molly is a pleasurable pastime, but the encounter with her creates our own relationship with her. Our own memories of first encounters (where, when, and what happened next) propel the way we understand and appreciate her. What did we make of her then and what do we make of her now? My own memories of Molly start at school, when I read Ulysses for the first time, a Penguin copy found in lost-and-found. I started Ulysses, aged 17, not at the front but the back. What kind of story deliberately has no punctation? There has been plenty of time to work out the answer to that question, and I still don’t have all the answers. It is a permanent to-and-fro, punctuated by yes.

Questions abound about how to theatricalize Molly, who ranges over her entire life while not moving from her bed. Every fifth thought is seemingly unrelated to those that came before. How to make Molly intimate and direct (Sian) while maintaining the rush of lifetime memories, is a scriptwriting challenge. How to know who she is talking about at any one time is likewise of interest, as for example how to navigate the text referring to both Bloom and Blazes as ‘him’. (Sian)

Molly’s monologue closes the novel on a positive note, so far as the relationship between the Blooms is concerned. (ER) The marriage may be tired and fraught but it’s far from a lost cause. It dwells in that place where romanticism and realism and children must co-exist.

Who is the more romantic, Molly or Leopold? There is a hefty dose of realism in Mrs. Marian. (FDG) She has a hard streak. It can be seen in contrast to Leopold’s propensity for dreamy and tolerated peculiarities, his “melonsmellonous osculation”.

Ulysses is a comedy. It is comic at the level of incessant straight humour. Simultaneously, it is comedy in the classical sense, a work of art that ultimately presents life as positive, that affirms life, all’s well that ends well. Joyce shifts between ‘Daunty, Gouty, and Shopkeeper’, aware of their use of the word ‘comedy’.  Molly’s monologue is the best evidence of this view. She is romantic, realist, dreamer, hardnose. She knows herself, loves abundantly, goes where the weird logic wends, and survives.

Is Molly incomparable within the female types in the novel? Molly is a realist, but then in what ways is Gertie a realist? We talk of Molly as a real woman and wonder if Joyce is making fun of Gertie. (JS) Age difference matters. Gertie is young, at the age when a girl dreams. (MCD)

It is awkward explaining if and why Joyce is making fun of Gertie. Her sentimentality, influenced by her reading, co-exists with an ingenuousness about sexuality that makes it possible for her to catch Bloom’s gaze. (JS) Molly’s relationship to the author is very different; she evens talks to him at one moment. Her natural, elemental sexuality is mixed with pragmatism (JS). Is she the character Joyce takes most seriously in the whole book?

Even when Molly is being negative, gets stroppy about something or other, or has some slapdown remark, it is happening at the service of yes. Yes will override all other considerations.

At breakfast on the 16th, as we recall, Bloom’s response to the Titbits story might be understood as an act of literary criticism, but the novel suggests that it’s also inspirational for Bloom. That he might embark on a joint publication with Molly based on her conversation. How much Joyce reveals his preoccupations. (FDG) And in fact Joyce did embark on the publication of most intimate thoughts, his wife’s, his own, and those of others in his life. At the centre of this activity was the desire to have these experiences announced and shared with the world, a refusal to live with personal isolation. This bed thy centre is where all the world’s a stage.