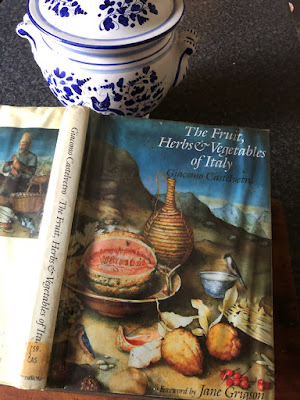 12. Giacomo Castelvetro. This is technically about the oldest cookbook in the collection, first published in 1614. Its purpose is age-old too, to convince the English that they should eat more greens. Castelvetro is the forerunner of many authors in this series, an Italian introducing good Italian cooking and mysterious foreign ingredients to a suspicious audience. That he finds himself in London at all is due to his being that conflicted individual of the times, an Italian Protestant in need of protection. It’s a favourite period work, pounced on at a throwaway table of the Yarra Plenty Regional Library Service, Ivanhoe, Rosanna, Watsonia, Eltham sometime in the noughties. Gillian Riley’s translation, Jane Grigson’s Foreword, and the fruttivendolo artwork combine to make a fine History Play production. Castelvetro’s style is appealing. His concerns are health, balanced diet, simplicity of presentation, and freshness. (His entry on Rice indicates that risotto must still have been in its early stages, and he from Modena.) The author had been Italian teacher to James VI of Scotland, influential in literary circles, and the first known teacher of the language at Oxford. But his return to England now that James was I of England and Ireland came with pressures, having just escaped near imprisonment back home under the Inquisition. He sought the patronage of Lucy Russell, Countess of Bedford, familiar to some readers as patron of Ben Jonson and John Donne. However, she could not assist in promotion of his cookbook as her own fortunes had recently taken a blow. Castelvetro died in poverty and distress in 1616, only a month before the death of William Shakespeare. 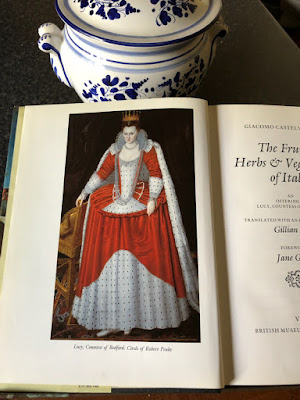 Three entries.
Strawberries.
In Italy, it is only in spring that we have these fragrant and health-giving berries, whereas you happy mortals, though you do not get them so early, have them twice a year, in mid June and in October. Last year I was in Cambridge on 28 October, and was amazed to be eating strawberries by the plateful, not just one or two. They were exquisite.
Strawberries are one of the healthiest fruits to eat and would not even harm an invalid. A decoction made from both leaves and roots is good to drink for inflammation of the liver and regulates the kidneys and the bladder. Used as a mouthwash it hardens the gums, strengthens the teeth and clears catarrh. (page 71)
Rice.
Then we have rice, which is eaten in many countries, but grown in few. We plant it in low-lying places, under water. It has a good yield, and is a most useful crop. It is a good food for the able-bodied, but hard to digest. The Turks eat more rice than any other nation, and cook it in may different and delicate ways. (page 103)
Figs.
I must not forget to mention figs, which we have in vast quantities, and which everyone eats raw. We do not have many dried figs in my part of Italy, though they are common in other regions, and are very good indeed, particularly with almonds. Confectioners preserve them whole with peeled almonds in the shape of Dutch cheeses, a delicate sweetmeat, which they keep to eat during Lent.
Dried figs, roasted a little and eaten at bedtime, will help to clear up those nasty coughs that linger after a bad cold. But make sure the figs are not too stale. (page 111) 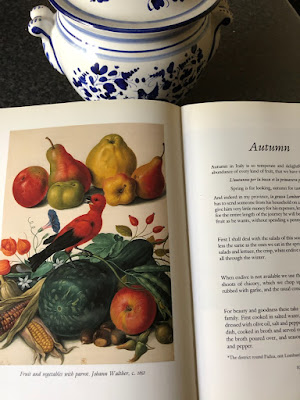